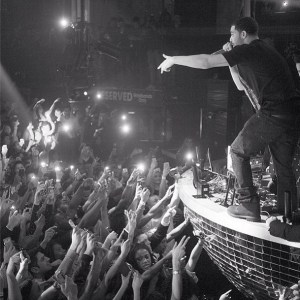 “Drake, here’s how they gon’ come at you, wit’ silly rap feuds, try’na distract you” are the words Jay-Z had for Drake in 2010. This is a line from Jay-Z’s verse on Drake’s “Light Up” song off Thank Me Later. Ironically, when Drake reached the peak of his career, it was Jay-Z gunning for him.

A month ago, Jay Electronica released a “We Made It” freestyle with Jay-Z featured on it. On the record, Jay-Z dissed Drake and they have continued to exchange disses since then. Ironically, the Toronto Raptors and the Brooklyn Nets faced off against each other in the playoffs today.

Live at the game, Drake provided a little commentary and the question of where Jay-Z was came up. Last year, Jay-Z sold his ownership in the Nets in order to pursue sports management with Roc Nation Sports. In the commentary, Drake had an interesting scenario about Jay-Z.