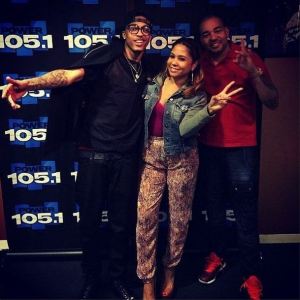 Although August Alsina is a native of New Orleans, he relocated to Atlanta and built his career. Signed to Def Jam, August Alsina released his Testimony album, his solo debut, today. The album has a lot of notable features and August Alsina has made some big guest appearances.

August Alsina stopped by Power 105.1 to talk to “The Breakfast Club,” which airs on Revolt TV, with DJ Envy and Angela Yee, Charlamagne Tha God was out. He discussed Testimony and the topic of giving women oral sex when his relationship with Angela Yee was discussed. The interview also had August Alsina talk about his current back-and-forth with Trey Songz.