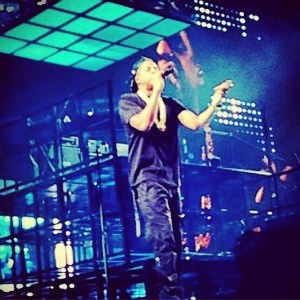 Beef has been brewing between Jay-Z and Drake for some time and it is full of ironies. Back in 2010, Jay-Z appeared on Drake’s Thank Me Later, warning him of how rappers will come at him the bigger he gets. Who would’ve guessed Jay-Z would be one of these rappers?

Drake often addresses being targeted by other rappers and he plays it off with comments about the women in their lives loving him. This has been the basis of his back-and-forth with Chris Brown. But, this may also play a part in this budding beef with him and Jay-Z.

Today is April Fool’s Day and Media Takeout has another outrageous story. After going through Beyonce’s phone, Jay-Z discovered Drake is one of her contacts and that he often sends her “special” messages. According to reports from Media Takeout, Jay-Z is furious after seeing photos of Drake showing his private parts to Beyonce via text messages.