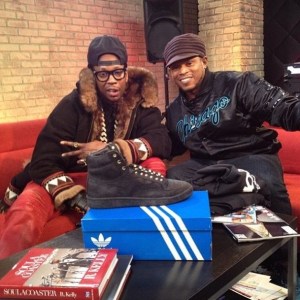 Earlier this week, 2 Chainz announced he was working on his third album. Expected to be released later this year is B.O.A.T.S. III. It has been three years since 2 Chainz officially left Ludacris and DTP Records in order to pursue a solo career, which led to him partnering with Def Jam.

Ludacris has since moved further into the business world and he has given all of his support to 2 Chainz and his movement. Meanwhile, 2 Chainz has opened doors for all the artists who are in his circle. Comparable to Ludacris in the early 2000s, 2 Chainz is doing all he can to establish himself as the biggest rapper in the game.

Sway had the chance to talk to 2 Chainz for MTV’s “RapFix Live” about various topics. Taking a trip down memory lane, 2 Chainz reflected on Ludacris giving him his initial business advice and it led to him opening his first bank account. Later in their conversation, 2 Chainz talked about being a fan of Dipset.