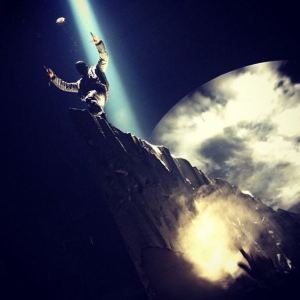 When it comes to ego, Kanye West will be the first to admit that his is pretty massive and he thinks of himself as a creative genius. However, Kanye West is still receiving flack for his interview with Sway, while Beyonce is looking genius-like. Last month, she shocked the game with her self-titled surprise album.

On the flipside, Kanye West released Yeezus to disappointing sales and backlash from the critics and fans. According to a rumor reported by RadarOnline.com, this is only adding insult to injury. Their sources say Kanye West originally had plans of dropping My Beautiful Dark Twisted Fantasy as a visual album.

According to RadarOnline.com, Kanye West feels defeated because of Beyonce’s success with her visual album. Kanye West had plans of doing his album in this manner, but he was advised against doing so and he dropped My Beautiful Dark Twisted Fantasy as a traditional album. Because of the backlash he is already facing, Kanye West decided to not voice his feelings on this situation.