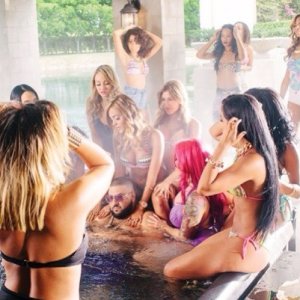 Every year, DJ Khaled promotes his albums the same way starting with the January 1 announcement. This year, DJ Khaled has experienced something different in terms of his popularity. In the past, the DJ Khaled summer single would take over the radio, but this year, “No New Friends” with Drake and Rick Ross was underwhelming.

Suffering From Success was the album title and all sumer long, followers have been subjected to seeing DJ Khaled in poses with his head down. During the summer, DJ Khaled resorted to a marriage proposal to Nicki Minaj to promote their single. The “I Wanna Be With U” single also came up short.

Continue Reading
You may also like...
Related Topics:dj khaled, drake, i wanna be with you, kiss the ring, nicki minaj, no new friends, rick ross, suffering from success