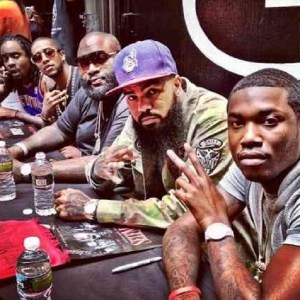 Rick Ross said he was going to do it and then he did it, setting up Maybach Music as one of the biggest labels in the game. Nobody doubts him when he says he will close the deal anymore. Maybach Music Group released their third consecutive album, Self Made 3, which dropped last week.

Sales projections for the album were low, compared to the units the artists move as individuals. Because the album is a compilation, fans expected a wide array of music from Gunplay, Meek Mill, Young Breed, Stalley, Wale, Omarion, and Rick Ross. Last week, Gunplay released his single off the mixtape.

The official sales results are back in for Self Made 3. With the original projections being somewhat low, the sales results for the album came in today. In the first week of sales, the Self Made 3 album has pulled in 51,355 copies, which is comparable to the results of the other albums that have dropped.

Game reveals he did not punch Brandon Jennings
Papoose clowns “Nothing Was The Same” on Twitter, calls the album “sweet”