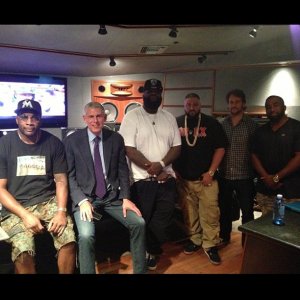 Ignoring Rick Ross has been a hard thing to do, especially since he released Teflon Don in 2010. He released the “BMF” single with Styles P and he did not look back. Later this year, Rick Ross will release Mastermind, his sixth studio album. Hip hop fans stay on the lookout for new Rick Ross music, but his collaborations have been on point.

Rick Ross hit the hip hop world early in 2011 with news about God Forgives, I Don’t and he planned a lot of collaborations to get people ready. All of it was promotion for his album, but Rick Ross made some memorable appearances. Late in 2010, it started strongly for Rick Ross, appearing on Kanye West’s “Monster.”

Working on projects with Rick Ross, it becomes clear how much of a visionary he is when it comes to the music. With so much flack being sent the way of the boss, this list here is out just to remind people what a talent Rick Ross is. Rick Ross has always been talented and stole the show, but he has been on it since 2010.

Now, without any more delays, here is a list of some of Rick Ross’ top features, be on the lookout for more Producer’s Corner too, it’s coming back to Hip Hop Vibe next week.

See Rick Ross’ guest appearances from 2010 to the present below:


This list started off with “Monster” because this is where it all started for Rick Ross with his marathon guest appearances. “Monster” was Kanye West’s show with his 2010 album, but everybody came ready to win on this song. Three years after this single hit, there are still debates about who had the best verse, they all brought it and that is coming from a music fan who works in the industry. Only doing the intro, Rick Ross killed it.


No outsiders expected Ace Hood to have the year he did in 2011. He got a little overshadowed by all the other comebacks, but Ace Hood delivered solid hits and he is gearing up for more in 2013, look out for We The Best this year. But, two years ago, Ace Hood got with the two hottest rappers in the game for his “Hustle Hard” remix in Rick Ross and Lil Wayne. Some could argue that Lil Wayne passed the collaborations baton to Rick Ross on this song.


From the beginning, nobody planned for 2011 the way Rick Ross did. He signed both Wale and Meek Mill and during this time, Meek was probably still best-known for his mixtapes that had taken Philadelphia over. But, Meek Mill took over the mainstream with his “Tupac Back” single. Unlike many of Rick Ross’ other collaborations, he only did the hook on “Tupac Back.” Catch this song on Rick Ross’ Self Made compilation he used to introduce the new members of Maybach Music.


It wasn’t only Rick Ross that came prepared in 2011, DJ Khaled also had a plan laid out. Dominating every summer, Khaled warmed fans up in the spring and this led to Rick Ross giving him an assist on “Welcome to My Hood.” The record also featured Plies and Lil Wayne and then T-Pain on the hook. Rick Ross had the opening verse on “Welcome to My Hood,” which was one of 2011’s first hits during the spring.


It seems like Red Cafe is going to make the world wait forever for his debut album. If he was ever going to release the album, it was in 2011. Red Cafe delivered a strong hit single with “Fly Together,” which featured Ryan Leslie and also Rick Ross. The song became a hit later in the year of 2011 and helped Rick Ross close the year out on a high note that included a bunch of high-profile collaborations. With no album, he was 2011’s Artist of the Year, forget what Hip Hop Vibe said.


Hands down, the summer anthem of 2011 was Lil Wayne’s “John (If I Die Today).” He kept his hits coming by remixing Rick Ross’ “I’m Not a Star” for Tha Carter IV. A lot of people did not realize, at first, that the song was not Rick Ross’, either way, he helped Lil Wayne post one of 2011’s biggest hits and this is part of the reasons Tha Carter IV went quadruple platinum, but this song still goes in.

“I’m On One” by DJ Khaled ft. Drake, Rick Ross, and Lil Wayne


This is still one of DJ Khaled’s biggest hits, look at the roster and don’t ask why. While “John” was still doing well, DJ Khaled leaked “I’m On One” and it continued to assault that Rick Ross and Lil Wayne put down throughout 2011. Rick Ross, once again, stole the show with this track and he rocked it at the 2011 BET Awards performing “I’m On One,” making it memorable.


“Tupac Back” made Meek Mill into a mainstream star, but he still had that one hit wonder tag on him. All of that ended when “I’m A Boss” came out and every rapper in the game felt obligated to add their own verses to the song. Rick Ross also appears on this single, but just unlike on “Tupac Back,” he is rapping his own verse and is on the hook and doing ad-libs, providing the moral support for Meek Mill. This is probably one of 2011’s biggest street singles, Meek Mill started his run with this track.


Everybody within the Maybach Music camp knew Wale could pull it off and become The Gifted star he is now. It was Rick Ross’ unshakable faith in him that convinced everybody of what Wale could do and now the whole world sees it. Early in 2011, Wale signed with Maybach Music and Rick Ross put together Self Made for his crew and the final single off the album, “That Way,” doubled as the lead single for Wale’s Ambition. Jeremih is on the hook and Rick Ross takes the final verse, showing he can be smooth for the ladies, but this song established Wale and his current lane as the man who raps to the ladies.


Mary J. Blige has always had chemistry with rappers and she made it her business to feature many of the biggest rappers of the time on her records. She could not say enough good things about Rick Ross, after working with him on her “Why” single. Rick Ross also does well with singers, especially females, and this song became one of 2012’s first summer anthems. “Why” is a great song for music heads to revisit.


Last summer, DJ Khaled got it started early, rolling out the first summer anthem in March. “Take It to the Head” is DJ Khaled’s lead single off his Kiss the Ring album. The song features Rick Ross on the intro, Nicki Minaj responding to his first verse, Chris Brown on the hook, and Lil Wayne on the final verse. Once again, Rick Ross came hard and this is among his biggest guest verses in recent history.

“Think Like a Man” by Jennifer Hudson ft. Ne-Yo and Rick Ross


All the movie heads last summer were talking about that flick, Think Like A Woman, Act Like A Man. Yeah, the movie was pretty cool, but the music heads were more interested in the “Think Like a Man” single by Jennifer Hudson, which was one of the first summer anthems. Ne-Yo is also featured and Rick Ross provided the much-needed dose of rap on the single.


Launching Self Made 2 was Wale with the “Bag of Money” single. This was one of the first anthems and the title really makes sense. What looks better than a bag of money? Rick Ross handles the chorus and he takes the intro verse, Wale, T-Pain, and Meek Mill handled the rest of the song. This really isn’t a guest verse, since MMG is all on it, but the song still goes hard.


For a lot of reasons, “Lemme See” is important and this is one of Usher’s biggest singles in recent years. But, in all seriousness, the Trayvon Martin case is ongoing and Rick Ross slipped in a gentle reminder of what could happen to the man who took his life. However, the focus of the song is a lot lighter and every man knows the feeling, come on girl, “lemme see.” Rick Ross really set this single off and this became THE anthem of 2012, including winter, summer, spring, and fall.


French Montana also dropped an anthem with his “Pop That” single and it still goes hard. This was and still is the strip club anthem, especially at Magic City and King of Diamonds. Rick Ross has a verse on this track, as does his 2011 partners, Drake and Lil Wayne. Somewhat off topic, go out and cop Excuse My French by French Montana, he put in a lot of work on that album.

“I Wish You Would” by DJ Khaled ft. Kanye West and Rick Ross


Late in the summer of 2012, DJ Khaled released one of the biggest hits. Kanye West made his comeback last year and Rick Ross finally put out God Forgives, I Don’t. But, “I Wish You Would” was the song last summer, late in the summer. Shit, a lot of us are still bumping to it right now.


What Rick Ross and Lil Wayne were to 2011 is what Rick Ross and Future are to 2013. Ace Hood needed a surefire hit to get himself back in the game and he’s an all-star thanks to having assists from Rick Ross and Future on “Bugatti.” Released earlier this year, the song became an anthem and is still heavy in rotation, even though it is a few months old. Rick Ross handles the last verse and Ace Hood is planning on releasing this next month.

Alright, this is a list of most of the songs Rick Ross appeared on from 2010 until now, since he’s really been killing it, comments welcome. But, Rick Ross got a lot of solo music due this year, be on the lookout for Mastermind, which is coming later this year.