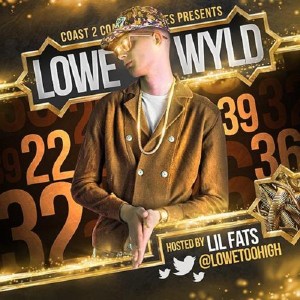 Assuming a position among the next generation of stars in the rap game is Lowe. At only nineteen years old, Lowe has a movement in place that is making him into one of the leading young rappers in the game. The hip hop scene in Pennsylvania is growing and Lowe is among the next generation of leaders and he put in a major case for this with his Wyld EP.

Keeping it short, Lowe delivered eight new tracks to update his fans. Guest appearances are included on Wyld, but Lowe kept the focus on himself, for the most part. Going outside of the box, Lowe teamed up with mixtape giant, Coast 2 Coast, to provide the hosting for his mixtape, as in the entire company and not just one of their DJs.

Lowe talked to Hip Hop Vibe this evening about the Wyld EP. With his name coming up so much off the EP, Lowe is preparing a summer tour to further promote his new music. However, a lot of the promotion is built in, as Lowe received shout outs from A$AP Rocky, Big Sean, 2 Chainz, and Wiz Khalifa.

Can you just tell us about what the listener is getting themselves into when they listen to Wyld? Really, they are learning what my life is like. I want people to know how music is today and how energetic I am with it.

Wyld. Why did you choose this album title and this particular spelling for your EP title? I chose that because that is what me and my friends say, “wyld,” I am an energetic person, I am wild. So, on my first EP, I gave to you Wyld, which matches my personality and me myself.

Everything about this project was different, was this your plan from the beginning, or does working outside of the box come natural to you? It comes natural to me, I don’t want all my songs to be the same and the listener does not want that either. So, I brought a little something for everyone, so they saw each side of me on this record.

Instead of having a DJ host Wyld, you had Coast 2 Coast Mixtapes step in and host your tape, can you explain why you took this route? Yeah. When I contacted Coast 2 Coast, I heard about them since I was young and I knew they did good work. So, I reached out to them and then we got the ball rolling for Wyld.

You have shout outs from A$AP Rocky, Big Sean, 2 Chainz, and Wiz Khalifa on the EP, how did you get in contact with these guys? Actually, my manager went through setting all of that up and that is how I got that.

Will we possibly see you working with any of them on future projects? It is definitely a possibility, but we do not have anything planned at the moment.

Can you tell us why you chose not to feature them on songs off Wyld? We had a set time to get everything together and there was no way we could get verses from all of them in time, so we settled with the shout outs instead of rushing things.

How has this music journey been for you since releasing Wyld? It definitely helped me build a bigger fan base, my music is being taken much more serious than it used to be.

When does your summer tour begin and what cities will you be hitting? My manager and I are getting things going and hoping to start in July or August, but we do not have all the dates lined up yet.