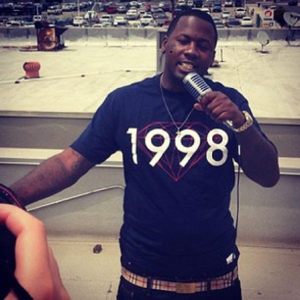 Two weeks ago, Alley Boy released his War Cry mixtape that is still doing numbers online. One of the hottest rising rappers in the game, Alley Boy hails from Atlanta and is a member of Duct Tape Entertainment. His mixtape success is a major reason the label ended up joining forces with Atlantic Records.

Alley Boy is continuing to push his way into the game with his music. War Cry is still spawning singles that are impacting the internet. Boasting features from Meek Mill and Yo Gotti, among others, Alley Boy has a long line of hits on the mixtape. The song featuring Meek Mill, “Stack it Up,” was recently released as a new single.

Hip Hop Vibe talked to Alley Boy recently about his new mixtape. In this interview, he spoke on how the Louie V Mob came together, the War Cry reaction and collaborations. Alley Boy also spoke on the possibility of him releasing an album and how he feels about mixtapes, as opposed to albums.

Can you tell us about how the Louie V Mob came together? Master P reached out to me, he asked me if I was familiar with Fat Trel. He asked me if I minded doing a project with him and I didn’t mind at all.

How do you feel about the recent success of Duct Tape Entertainment? I like the process of our growth. We are big in the streets, we got the respect we wanted, and now it is just time to make some hits.

You have definitely come up, can you speak on your own mixtape success? It happened as expected, it was a real street project, plus it was really good music.  I am not surprised, but I am happy about it.

How long have you been recording your War Cry project? I started the project two months before I came to Los Angeles and did the joint venture with P. So, it has been a little bit under a year.

The project has been out for a week now, do you feel comfortable with the reaction to the mixtape, thus far? Yeah, I love the outcome of the mixtape. People are saying it was one of my best projects, I worked a lot with the label on this one, plus doing me. The combination came out good, I like the reaction. Bigger records on there.

Do you feel the features on War Cry were on point? Yeah, I always feel my features are on point. I only deal with people I am fans of, or  who I kick it with. I am mad my boy Eldorado Red isn’t featured on the tape, but he was out of town when we were recording. Other than that, everything was great.

You have been hot, recently, can you talk about your guest appearances? Anybody I work with is somebody I am a fan of in some form or fashion. So, it’s all the same.

Among the people you worked with recently have been 2Eleven, Chill Will, and Cashville’s Dice, how did those collaborations come together? Well, 2Eleven and Chill Will are some of my personal partners in Atlanta and we kick it. Actually, only Chill Will is from Atlanta and 2Eleven is from Los Angeles, but I met him in Atlanta. Cashville’s Dice is a little homie I met, but that was just a collaboration that came about through the internet.

Have you begun thinking about your debut album? Not really, I’m going to let the streets call for me first before I do an album. I don’t really think about that, so I’m just going to keep working.