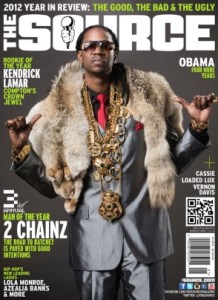 Coming into 2012, it looked as if no artist would match up to what Rick Ross had in store. Without releasing an album in 2011, Rick Ross managed to be the most-dominating artist in the game. The team around him played like champions and positioned him well for 2012. Rick Ross boasted of being the number two guy for too long and made moves toward the top spot.

Nothing can be taken away from Rick Ross’ 2011 efforts, but the same can be said for 2 Chainz, who was 2011’s breakout artist. 2 Chainz made his Def Jam debut with Based on a T.R.U. Story, his first solo album. With such anthems as “No Lie,” with Drake, and “Birthday Song,” with Kanye West, it was impossible to keep up with 2 Chainz.

Whether they liked him or not, hip hop fans were forced to listen to 2 Chainz music. While his music is not for everyone, 2 Chainz knows how to make hits. His efforts had to be noticed by the rap game and hip hop’s original publication also took notice of 2 Chainz’ work. 2 Chainz dethroned Rick Ross, who was back-to-back, The Source‘s “Man of the Year,” but 2 Chainz now takes this distinction.

Continue Reading
You may also like...
Related Topics:2 chainz, based on a t.r.u. story, birthday song, def jam, drake, kanye west, man of the year, no lie, rick ross, the source