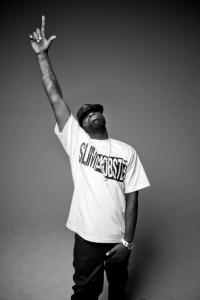 Stating the obvious, Slim the Mobster does not like 50 Cent very much. At one point, Slim the Mobster was rumored to be on the roster of G-Unit Records. Slim the Mobster can be compared to Game, as he is a Dr. Dre product who teamed up with 50 Cent, only to later have issues with him. Through Twitter, so much has been said, it seems unlikely these rappers will ever stand by Dr. Dre at the same time.

50 Cent credits much of his success to Chris Lighty, aside from Eminem. Dropping Ja Rule as a client, Lighty bet a lot on 50 Cent and won. When he died back in August, 50 Cent immediately jumped to the side of the family of Chris Lighty. For the sake of his manager, 50 Cent even ended his longtime feud with Fat Joe, gaining a new supporter.

Now, according to Slim the Mobster, it could all have been for show. Most reports say Chris Lighty committed suicide and people have said it was over his wife. Via Twitter, Slim the Mobster made strong allegations when he stated 50 Cent was having an affair with Chris Lighty’s wife. While he does not flat out say it, Slim has accused 50 Cent of being one of the direct causes of Chris Lighty’s death, strong words.