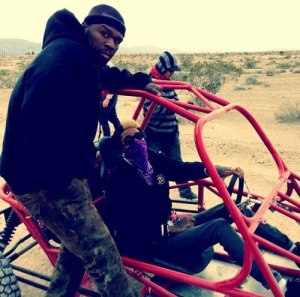 Young rappers have invaded the game in 2012, along with many other demographics which have been strong. The year of 2012 started out with Diggy Simmons’ age-appropriate lyrics that appealed to everyone. By the time Diggy released his album, however, the focus was already on Chief Keef, a young rapper from Chicago.

Chief Keef gained fame due to his hardcore lyrics and built an incredible buzz with his street single, “I Don’t Like.” An underground hit, “I Don’t Like” hit the mainstream when it was heard by Kanye West, who added Pusha T, Big Sean, and Jadakiss to the track. Immediately gaining radio play, a bidding war began for Chief Keef.

Interscope Records would sign Chief Keef, making him and 50 Cent label-mates. Since the start, 50 Cent was a major supporter, appearing on “Hate Being Sober” with Wiz Khalifa on his Finally Rich album. Above, 50 Cent and Wiz Khalifa are captured with no Chief Keef present, leading 50 to post on Twitter “@ChiefKeef not present at his own video shoot. Never seen anything like this on the first song.”