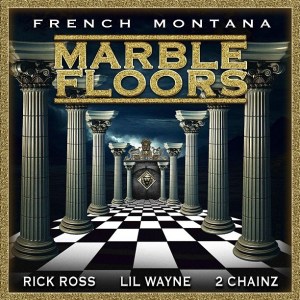 Things have not quite gone as expected for French Montana, but he was able to return New York City to the forefront of the rap game. French Montana and several members of the Coke Boys have watched their popularity grow. Meanwhile, French has become the backbone of Bad Boy Records and the best friend of Rick Ross.

Excuse My French, the debut album from French Montana, has faced several delays over the past year. While the album is delayed, the singles keep coming. The first single, “Pop That,” was a breakout hit. Drake, Rick Ross, and Lil Wayne were featured and French Montana gets Rick Ross and Lil Wayne, adding 2 Chainz for the follow-up.

“Marble Floors” is the second single off Excuse My French. Striking while the iron is hot, French Montana releases the official artwork for the single. Coming after the artwork will be the official audio. However, for the time being, the song remains like the album and the Mac & Cheese 3 mixtape with no set release date.