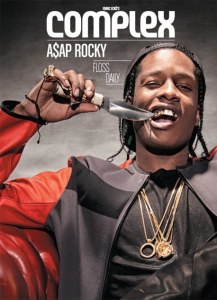 With the exception of French Montana, A$AP Rocky is one of the biggest artists to come out of New York City in a long time. Rising the ranks, A$AP Rocky has become the frontman to the A$AP Mob. As his popularity climbs, anticipation for LongLiveA$AP grows. A$AP Rocky’s style has caught the attention of the music industry, landing him collaborations with Rihanna and more.

For the most part, A$AP Rocky has remained rather peaceful. However, A$AP Rocky now joins the likes of Game, Rick Ross, Shyne, Young Jeezy, 50 Cent, Gunplay, and several others with fighting and feuding. A$AP Rocky wound up fighting SpaceGhostPurp, a former friend. With a series of situations leading to this fight, expect no reconciliation.

Complex has A$AP Rocky covering their December/January issue and he broke his silence on his issues with SpaceGhostPurp. During the interview, A$AP Rocky explained how everyone involved would be spending three days in jail. Things changed, however, when SpaceGhostPurp got “scared” and began “talking shit,” according to A$AP Rocky.