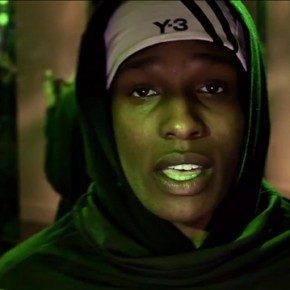 During the summer of 2012, A$AP Rocky appeared on Rihanna’s “Cockiness (remix).” The two would perform the single at the 2012 MTV Video Music Awards, which helped to further his superstar status. A$AP Rocky made a name for himself when he firmly grabbed Rihanna on her backside.

Doing what many young men have dreamed of doing since the days of “Pon de Replay,” for days A$AP Rocky remained in the spotlight. A$AP Rocky went on a short media run after the release of “Cockiness” and the MTV Awards. During each of his interviews, the young Harlem emcee was asked about Rihanna’s booty.

Rihanna has released her latest album, Unapologetic, displaying her “bad girl” side. With the new album out, Rihanna is back on tour. The Diamonds tour is set to launch and a new act has been added to the tours. A$AP Rocky is the latest artist added to the tour, but he performed “Cockiness” for Rihanna while still on the tour.