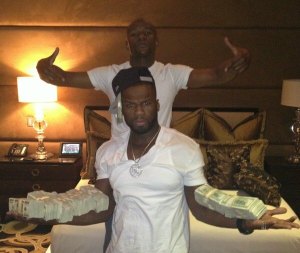 One person it seemed as if 50 Cent would never wind up on the opposite of the fence against was Floyd Mayweather, Jr. The two have been the best of friends over the years, with the exception of a fight that led to a feud. For the most part, 50 Cent has treated the famous fighter as a brother.

50 Cent often promoted Floyd Mayweather, Jr.’s fights via Twitter and could be found ringside. Always looking to expand his business portfolio, 50 Cent decided to turn this into a business, launching Team Money Team Promotions. Manny Pacquaio, a primary rival of Mayweather, was the first figher signed.

Earlier this week, via Twitter, 50 Cent revealed there was no more TMT Promotions because the other partner did not put up their half of the money. Many were wondering who this other partner was, but it has become evident, again through Twitter, Floyd “Money” was the silent partner. The Twitter beef began with 50 Cent mentioning a fighter who wanted to go against Floyd and 50 offered $20 million and said the fighter was also mad about the money.

Floyd Mayweather, Jr. would go off on a Twitter rant, calling out 50 Cent’s SMS company. The back-and-forth was so amusing, Rick Ross jumped into the frenzy. Once Floyd posted “hold my money, fuck boi,” Rick Ross had to comment.