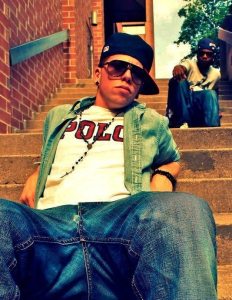 Every day, a star is born is how the famous saying goes. What goes untold, however, is the hard work that led up to the day when the star was born. There are thousands, if not millions, of aspiring rappers all wanting the same thing. In the end, they are separated by how bad they want to win in the end.

Frankie Prada clearly wants his position in the game and he wants it now. It was two years ago when Frankie Prada first began rapping. Now, the Queens native is working closely with Droop Pop, of the Coke Boys, along with Fred the Godson and many others. Among the things going for the young emcee is his growing fan base and his viral success.

You said you are relatively new in the game, how long have you been rapping? It’s been about three years.

How did you get your start? Originally, I started out freestyling, I never wrote a song in my life. The first time I freestyled, I was actually booed. Right then, I started taking things more seriously. Seeing how I was rejected at first made me go harder.

When did you begin to receive support? Two years ago, back in 2010, when I recorded one of my first freestyles. When people realized I had the bars.

What was it like to hear yourself on Hot 97 for the first time? It was insane, I actually got a shout out from Fred the Godson. One of my homies from New York called me and I tuned in to Hot 97. It felt wonderful, it felt like a major accomplishment.

How did you and Fred the Godson link up? What happened was, my homie Droop Pop contacted me. He told me he had a feature for us with Fred the Godson. I asked Droop Pop to give him my number, Fred called me and we vibed. From there, we just took off and have had a strong vibe since then.

So, it was from there that you linked up with Hunnafied? Shortly after.

What type of impact has the management over there had on your Money Mafia movement? It has had a major impact on my movement. Through the support of K-Dog and Money Mafia, it has helped me and my roster reach the same goals. Now, this brand is expanding the limits I thought it would reach. It is everything from connections to promotion to the reach.

Can you tell us more about the Money Mafia label? Yeah. Money Mafia is a team of artists from all parts of New York, along with parts of the United States. Right now, we are just on the East Coast, but we have singers, models, mixtape figures, and other people. We have come together as a melting pot with all we do. As the leader, I oversee everyone. I am not here to take money from anyone, I am just taking talent of all ages and making music with them, along the way making money.

When can fans expect a Frankie Prada mixtape and what type of impact will it have? I plan to release The Devil Wears Prada mixtape right before the end of the year. This project is being treated like an album, I have delayed it several times, just to make sure it is right. I have major features on this project, Coke Boy Cheeze, Droop Pop, Fred the Godson, Vado, Chief Keef, and many more. After this, I will also release more mixtapes, but this one drops right before the end of the year with a major host.

Watch “No Apologies” by Frankie Prada ft. Canon below: