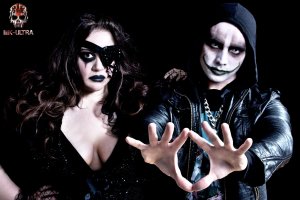 The debate about “real” hip hop has been ongoing since Nas’ Hip Hop is Dead album and campaign. Nas’ album came in the midst of a new wave of hip hop music, which left many older fans scratching their heads. Two years would go by and the “hip hop is dead” discussion continued.

Several artists from New York City, including Jay-Z, hinted that the reason for the decline in hip hop was the rise of the South, paired with New York’s fall, hurt hip hop. New York City is quickly returning to prominence, but critics still say something is missing. MK Ultra hopes he can help turn things around.

A native of the UK and a New York City transplant, MK Ultra offers an alternative to the current faces of the city, French Montana and A$AP Rocky. Recently, MK-ULTRA joined forces with MONARCH, which has resulted in more good music. The self-proclaimed most dangerous artist in America recently spoke to Hip Hop Vibe about a few projects he has going on.

What influences your brand of hip hop? My influences vary somewhat, as I have very eclectic musical tastes. I believe that music is something to be explored both by the artist and the listener and is not something that is meant to be created for contrived reasons or for fame and fortune. I grew up listening to a lot of Dub, Reggae, Blues and Funk music which naturally progressed onto Hip Hop. I was a 90’s teenager so I listened to Wu-Tang, Cypress Hill, Dead Prez, De La Soul, Common, Beastie Boys, Snoop Dogg, NWA and so many more. I would say that I’m heavily influenced by East Coast Hip Hop as I prefer the aggressive style and complex lyrical structure. I was an Electro producer for many years so I’d say that shows a clear influence in my production style. However when I’m writing music I try use many musical influences and nit them together to create maximum impact. I’m all about heavy drums, base and complex melody structures.

Why did you choose to make hip hop over other forms of music? I chose to make Hip Hop because I love the true ethos behind this musical genre. Hip Hop stay’s true to itself and is more commonly known to be a communicator of complex and profound social messages. Hip Hop is a very versatile musical style and can take on so many faces depending on what the artist wants to add to the mix. Contrary to common belief I find that Hip Hop is the most down to earth and endearing music as more often than not the artist is putting their heart and soul into transmitting powerful messages to society. As the industry has become more corporate and monetary based we have naturally seen a decline in the true Hip Hop revolutionaries that still stand by their beliefs. There’s only so many times I can hear someone rap about how cool they are, how much dough they have and their sexual prowess before I get bored and want to hear something a little more mentally challenging.

Would you consider your music to be more along the lines of old school hip hop or a new style? I would consider the musical style to be a fusion between old and new school Hip Hop. The great thing about this genre is that it certainly stands the test of time so its a great musical pallet to work from. For instance my debut single and video “Mind Control” has a real old school Public Enemy feel to the beat, however I’ve layered that with complex melodies and production techniques that bring the whole track up to date. When creating music I like to sound like myself as much as possible as I believe its important to be as individual as you can and not imitate others.

How do you feel about your brand of hip hop? I feel that my brand of Hip Hop really has something to offer the listener. Most importantly, I really spend a lot of time putting together ideas, lyrics and adding complex facets to really engage the person that’s listening. Its music made with heart and soul, which I feel is of the highest importance when making art. I started working with MONARCH, who is a professional Jazz and blues singer shortly after I started this project and she really brought a great dynamic to the music with her voice. From then on we joined forces to create our sound as it is now. There’s some more surprises to come however when we release the Unholy War EP and the MK-ULTRA feature film in 2013 so stay tuned.

In what ways would you compare the UK hip hop scene to hip hop in other places? I would say the Hip Hop scene, in general, is pretty universal, really. When I go to gigs in the UK, there is an obvious difference in as much as the different dialects which are spoken in the music, however the UK scene I would say has its own representation of the global genre that is Hip Hop. I especially like the scene in London as the accent sounds great over beats and the vibe down there is always fresh and lively. I’m a northerner however so again the scene up here is massive too. We have a pretty hard hitting style in the north which I like. Full of energy and aggression.

How did your music wind up on the Bully soundtrack? I was following the Wu Watchmen for a while, as I liked their sound and ethos. I saw an advert on Black Masks’ artist page about wanting music to feature in their movie. Having already worked with ‘Seventh Sign’ from the Watchmen on the Fieldz of Terror, Vol. 2 album I took the opportunity to submit some of my music. The response was great and they used my track in Grone Da Radikal’s scene where he’s with a naked hooker who’s getting high on dust. Myself and MONARCH thought that was pretty hilarious. As a result of being in the movie soundtrack, I was later signed to Brikaza Records which is owned by Grone Da Radikal and the Jerzee Joker. Further, still myself and Monarch were spotted by one of DJ Symphony’s (Official Wu Tang DJ) scouts and asked to feature on the Ghostface Killah mixtape release this year. We hope to maintain this momentum and keep pushing for greater things.

Can you talk more about your alter egos? The idea for the alter ego’s MK-ULTRA and MONARCH came from the illegal CIA mind control experiments that they were running shortly after WWII. The research was started by the Nazi psychoanalyst, Dr. Joseph Mengele, who I actually based the character, Dr. Ivan Von Schrecklegruben, on in my story. You see him in the “Mind Control” video. Our characters are born into the mind control experiment by a woman that is called a breeder. Her sole purpose is to give birth to unregistered children for the research program. In the case of MK-ULTRA, who is also known as Project 7, and his sister MONARCH (Project 1) they were used in a super soldier program which had the objective of creating the ultimate assassin. By use of torture, drugs and sensory deprivation they compartmentalized the brains of our characters to be individually programmed with various personalities that would be triggered at the will of the handler to carry out a range of tasks.

Through genetic experimentation the Nazi scientists found a way of unlocking the higher DNA helix’s known to mainstream science as junk DNA. However by unlocking these higher DNA strands they found that they activated intense levels of psychic ability within the subjects, to the point that Project 7 and 1 became the most dangerous and valuable commodity on the planet. Project 7 was trained as a governmental assassin using his powerful psychic abilities to wipe out opposition to the globalist agenda. His sister Project 1 was trained as a remote viewer and controller. Her abilities allowed her to view situations, documents, conversations, secret technologies and even control the minds and actions of individuals. This whole story will be elaborated on in much more detail in our coming feature film which will combine this original and unique story with explosive underground Hip Hop, so stay tuned.

How do you think all of this has contributed to your music? I believe that our concept makes our music more individual. Not only that, it gives the viewer/listener much more mental stimulation than a lot of mainstream music that’s out there. We are also bringing about the awareness of how the media influences our minds on a daily basis to conform or view the world in their preordained image. We are telling people to stand for what they believe in and to look outside the box by means of seeing the picture as it really is. Our motto is ‘Free Your Mind’ as we feel that it is very important to exercise your personal will and perspectives over what you are told. The mind is a powerful thing so our message is to use it to create, learn, philosophize and stretch your potential as far as it’s possible.

What separates you from the sea of other artists making music, in all genres? We look different, we sound different, our back story and message is different. We use multifaceted ideas and bring them together to form our music and film. We are a Hip Hop act but also a complex comic book-esque movie series. There’s so many ways that we try to be individual in the way we create art that they really do show our diversity as musicians, producers and writers.

How can potential MK-ULTRA fans connect with you on the internet? Any potential fans can connect with us, watch our videos and listen to our music on the following links:

The MK-ULTRA website will be launched in December after the release of the “Unholy War” single and music video.