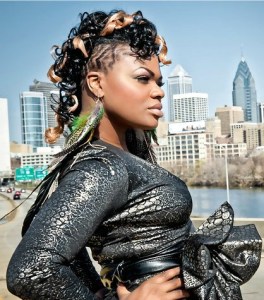 Much like many other cities, Philadelphia has been thrust back into the spotlight due to the efforts of various stars. The spotlight is currently on Meek Mill, who has his debut album on the way through Rick Ross’ Maybach Music, and Tone Trump, signed to Young Jeezy’s CTE. It has been a strong journey for Philadelphia, who has many other rising stars.

Hedonis da Amazon is among the rising Philadelphia stars, alongside Trel Mack, her rise came five years ago and she is currently on a comeback. One of the steps in her comeback has been being a part of Eleven’s She Got Next movement. Earlier this year, Hedonis made major steps back into the spotlight with her First Lady mixtape.

Proving to be one of the more intelligent rappers in the game, Hedonis da Amazon would speak to Hip Hop Vibe about various topics. Hedonis da Amazon discussed First Lady, her opinion on femaele rappers, and the Philadelphia hip hop scene. An interesting conversation was brought forth by Hedonis.

Is it safe to say you will be voting for Obama in a few days? Yes, very much so. Not because he is black, but it is because he needs time to prove himself. I think we all need to get behind people and give them time to prove themselves. The economy is turning around, there is job growth and things coming to be. I am willing to give him another four years to see what else he can do. The health care has not kicked in for everyone yet (laughs). We need four more years to get the culture to understand politics. I felt guilty about rapping, at one point, with so much going on in the world. But, the people need to be educated, it ain’t no joke out here, so I spread it in my music.

Who are some of the people you worked with on First Lady? I worked with a lot of up-and-coming artists. There are a lot of records from people in my hometown. This is the first mixtape I did in my hometown. When I did my first mixtapes with DJ Kay Slay, I had a lot of New York City and Miami artists on my projects. But, on this project, I had a lot of up-and-coming Philadelphia artists for the Philly culture. Peedi Crakk and Freeway are among the people featured on the project. I wanted people to pop this CD in and feel the Philly vibe on the record. First Lady is the first mixtape I ever did, right here in my city.

Do you feel as if the people understand the direction you were trying to take? I feel like, in 2007/2008, when I first came on the scene, they did not understand. People knew I was lyrical, but they thought I was a little weird. I think my timing was off and a lot of men were threatened by my aggression and my persona on the records. Back then, I think they really missed out on me. I had the industry energy on my projects. Now, I know what it takes to give something to everyone in my music and I do music for everyone now, including myself. I used to think “me me me,” now I think “us us us,” but I love the records for just “me.” I want to keep it real and restore the respect in the game.

How do you feel about the representation about females in the rap game? (Laughs). I got in trouble when I said there was no blueprint never laid for female rappers by a female rapper. No one laid a blueprint that works for all of us, it only works for them. So, no female can follow what another female did to make it. I do not know who to feel about the female rappers now, there is no comfortable position for female rappers, it is so chaotic. They do not know where or how to place us, so it is hard to do a female rapper’s type of style, because everyone stole from us. As a result, we look like the impostors, we want to be the video vixens and be in the streets, but we are the originals and now we look like we are nothing. I say “we,” because all of the female artists are advocates, because they’re fighting for something. By the time they make it, they are burnt out. As you can see, I take this very seriously. It looks crazy when I’m out there on stage and doing my thing, but when the doors close, I feel the struggle. Being a female who can write and paint pictures out of a blank canvas, but a lot of pain goes behind it. A lot of women cannot handle it and the rap game is missing out big time, because they will not allow other ideas.

Being a female rapper from Philadelphia, did you ever look up to Eve? It happened so fast, I have to look up to someone who stays up. By the time I got up, she was gone. When I gained my large fan base, she was not on the top for me to turn to for guidance. When I was trying to come up, Remy Ma was the top chick in the game, I watched her and I liked her hustle. I took that and used it to inspire me. But, Eve was not there struggling anymore, she left and did some other things. She did what she did, I am not knocking that. Eve is a great actress and she is not out there acting stupid, she represents Philadelphia well. But, I simply do not relate to Eve. I do look up to other female rappers when I see their struggle and their respect for the craft. When I see that, I try to model it, because I want that in return. A confident female rappers, who push female rappers to be confident, I respect that. Jacki-O and Roxanne Shante were among the ladies who reached out to me and told me to keep doing what I am doing. That is what I look up to when it comes to a female rapper.

How do you feel about the resurgence in the Philadelphia hip hop scene? Oh man, me and Tone Trump used to do school tours together. He told me he listened to my music while he was behind bars. One thing I like about him is that he is a rapper who grinds. We talked about getting up and out of the city and doing things in other places. But, Tone Trump was very involved in the politics of the city. He stayed in touch with the local laws of the city, Tone Trump is very smart. Meek Mill is a nice dude, he showed me respect, told me he was a fan of my music, and was really cool. We do our brotherly love justice when we meet up. I am so proud of the talent of this city. But, this time I hope the talent is properly used and developed, because they hip hop world is missing out. A lot of money can be made off Philadelphia, we have the passion and the energy. The spotlight is on Philly and that’s a good thing.

Who are some of the Philly legends you look up to? Oh shit. Of course I love Beanie Sigel. I love anybody who has shown me love and direction. Freeway is among them, along with Peedi Crakk. Ms. Jade is still making moves and there are a lot of up and coming rappers doing well and I shout all of them out. That’s it, basically, of who I look up to. But, other than that, there are not many more that the whole world knows about. I could name some other hot rappers, but you’d probably say “who’s that?” There is a lot of energy here.