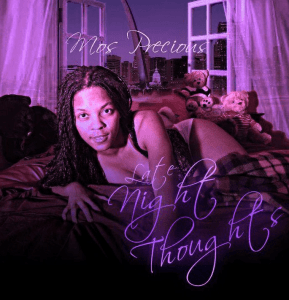 Last week, Hip Hop Vibe documented the St. Louis hip hop scene, which is going stronger than ever. However, St. Louis has suffered from a relative lack of media coverage over the past few years. Once Nelly and Chingy disappeared from the public eye, the other St. Louis artists did not receive any media attention.

Hip Hop Vibe covered five of the St. Louis area artists, but there are many more who are deserving to be on such lists. Mos Precious is among them, as she juggles many other acts with her role as an artist. Working on new material over the past few months, Mos Precious is ready to unveil Late Night Thoughts.