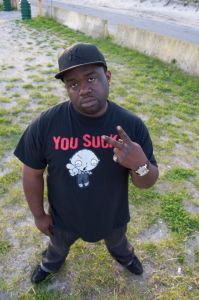 Beef has overtaken hip hop, once again, after a lengthy period of peace. The year started out with Drake and Common taking jabs at each other. For the obvious reasons, their feud was entertaining and the brewing beef between CTE and BMF was overlooked. Alley Boy would call Young Jeezy out several times, but things died down.

Eight months later, however, BMF and CTE are now in a full blown feud. A little over a week ago, Bleu DaVinci dissed Young Jeezy with “Got Right,” a remix of his own song. Alley Boy would take shots on Twitter. Several BMF and CTE members would get involved in the frenzy, namely Montana Tripp da Boss, of BMF, and Wink Loc, of CTE.

Exactly how did this beef with Young Jeezy and CTE begin? I can’t really speak on everything that happened between Bleu and Jeezy. But, the situation was Jeezy not holding down the homie Big Meech. But, personally, I am a BMF member, BMF Swish Gang, so I’m riding with my family.

So, personally you do not have any issues with Young Jeezy? No, I have no personal issues with him. Actually, I like some of his music, but we’re on different sides. Like I said, BMF Swish Gang and I ride with my team.

Who are some of the members of Young Jeezy’s camp that you have issues with? I can’t call it issues, but I will call it checking niggas. But, there are a few situations going on with CTE niggas trying to Twitter beef with the big homie. I call it an internet game, the only issues I have are with people I see face-to-face.

What are some of the things these guys said on Twitter? Niggas were trying to say Bleu DaVinci was a snith. If they are screaming that and there is no paperwork, they are just trying to disrespect the BMF name. I just met those guys a few months ago and I told them I was BMF and they had no problem. But, on Twitter, it is a different story and that is where the problem comes from.

How did you respond to these guys on Twitter? First of all, they were not mentioning names. So, I tagged Freddie Gibbs. I said “who the fuck is a Freddie Gibbs,” because I really didn’t know who he was. I was wondering who these guys were to come at us disrespectfully. I later sent a tweet to Wink Loc and he didn’t respond directly, either. I guess they’re in it for record sales, but I am in these streets for real.

Will there soon be any diss records? Oh, you mean the hip hop WWF? (Laughs). I can’t say yes and I can’t say no. With me being a street dude, I’m not with the back and forth. But, if I do make a diss record, it will be something that has them niggas on their toes, period. Do not get it twisted, I make party records and songs for the ladies, but I do get it in. Let the Games Begin coming soon, be on the lookout for some big collaborations and well-known DJs. I have a song called “The Truth” (laughs), I’m feeling kind of like Gucci Mane when he dropped his “Truth” record, I’m telling the truth and these niggas on Twitter talking shit.

Can fans expect BMF to link with Brick Squad through this beef? I can’t say yes or no, but personally, I am working with people from Brick Squad and Maybach Music and other BMF people are too. But, for the overall BMF, I really can’t say. However, I work with people who feel my music. Other than that, we moving out here. Shout out to the internet gangsters, talking about money and looking like they are broke. They talk about talent, but put it up against my talent and you will really see what it is.

Is there any way for this beef to be resolved? (Laughs). As far as me? If it comes to the overall camp, I have no idea. BMF is my team, my family, and I’m riding. BMF done linked up with a real nigga from Trinidad.

Would you like for this beef to be resolved? Really and truly, I don’t give a fuck, BMF Swish Gang period. It’s all about loyalty to me. I never grew up on peace, so bring it on. But, if you want to know if things will be resolved, talk to the bosses. BMF Swish Gang. By the way, that song, “I See Internet Gangstas” is crazy. Shout out the whole BMF Swish Gang and Bricc Gang, we in here.