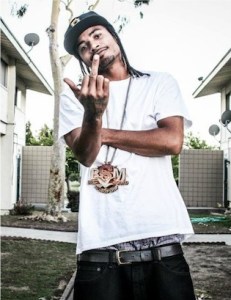 Suddenly, there is a lot of chatter about the West Coast hip hop scene. Los Angeles is back as if it never left in the first place. If one were to ask someone on the West Coast, they would indeed argue that point. There are several new stars from the Los Angeles area, among them Ice Burgandy. Signed to the popular label, Brick Squad Monopoly, Ice Burgandy looks to be around for a while.

Over the past few weeks, Ice Burgandy has kept his fans updated through his web series, “A Day in the Yung,” which has amassed thousands of views. Ice Burgandy has documented each move, as he continues making steps toward becoming the biggest rapper in the game. Recently, Ice Burgandy dropped his mixtapes, Burberry Burgandy and Rhythm & Burgandy.

Can you talk about Burberry Burgandy and Rhythm & Burgandy? I just dropped those two mixtapes on October 17, 1017, that is our day. Rhythm & Burgandy are for the ladies, gangsters, gentleman, everyone. Waka Flocka Flame and 2Eleven, along with Brick Squad and Diamond Gang members were featured on the mixtape. Burberry Burgandy is that traditional Ice Burgandy shit. I got features with Gucci Mane, 2Eleven, Iggy Azalea and more of the squad.

How do you feel about the reaction to the two projects? I’m getting a lot of good feeback, Spin magazine recently featured me. I am doing well on the internet and getting on major websites.

What inspired you to release both mixtapes together? I’m addicted to working, so I stay in the studio. I had so many songs, I decided to just release this. I will probably release another mixtape before the end of the year, but I just wanted to give my fans some more music.

Do you have a favorite out of the two mixtapes? (Laughs). It changes every day. These projects get you in two different moods. It all depends on how I am feeling each day.

How did you link up with Brick Squad Monopoly? When Waka Flocka Flame came to California we linked up. I knew some people who were with him, we hit the studio and we made it happen. Waka flew me to Atlanta and the rest was history, literally an overnight type thing.

Will you be appearing on any upcoming material from the Brick Squad stars? Yeah. I’ll be on some of their new mixtapes. Gucci Mane is working on a new album and I might be featured on it. It might be a while before Waka Flocka drops, but I will have more songs with him.

Outside of Brick Squad, who are some artists you will be working with? 2Eleven, French Montana, my people back home. That’s about it for now.

Your series “A Day in the Yung” is doing well, can you talk more about that? Basically, that is just a vlog series I have going on right now. I just had a camera following me throughout the days to see what my life is like. It was interesting, “A Day in the Yung.”

Can you tell us about some of your other business ventures? Right now, I have my EverythingBurgandy.com website, I am selling my merchandise on the website, music, clothing, etc. I also have my own label, Diamond Gang, I’m working out here.

Can you talk more about this Diamond Gang label? It is my label, I signed a couple artists from my old neighborhood. Duce Mobb, Skrapp or Die, and Sean Mack are the artists signed to my label.

How does it feel to see the West Coast back in the spotlight again? It feels good, it feels real good. Right now, we are making a little noise.

Who are some of the West Coast legends, in your book? Ahh, got to go with Snoop Dogg, Suge Knight, he’s not a rapper, but he is a legend, Tupac Shakur, Ice Cube, and Mac Dre, rest in piece.

Will you be touring in the near future? Yeah. I am about to get on the West Coast version of the Triple F Life tour.