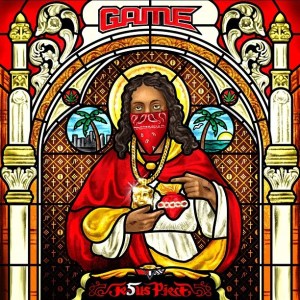 “The City,” featuring Kendrick Lamar, was the last single released from The R.E.D. Album, the long-awaited Game album. Forcing fans to wait three years, Game released he album after a series of delays. Once the album finally came, it was credited as some of Game’s best work.

Kendrick Lamar rose to national fame, due to his scene-stealing verse on “The City,” which he would discuss. When the music video was released, Game announced he would be appearing on VH1’s “Behind the Music” and that his new album was in the works. Because he made the people wait three years, Game decided to double up.

With the consistent flow of mixtapes coming from many of the biggest stars in the game, the wait for Game’s Jesus Piece seems like three years to some. Game already has the hip hop world buzzing with “Celebration,” his party-themed anthem with Chris Brown, Tyga, Lil Wayne, and Wiz Khalifa. Now, he delivers the official cover for his new album.