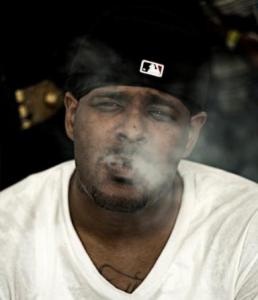 When hip hop fans point to the days when real lyricism matter, The L.O.X. are often mentioned. The Yonkers trio lit up the streets in the 1990s, alongside DMX. Throughout their careers, the trio often crossed paths with DMX. Getting signed by Bad Boy Records, it appeared as if The L.O.X. was on the fast track to success.

Jadakiss and Styles P are often credited as two of hip hop’s most-renowed lyricists. However, while the praise goes to the bigger hitmakers, Sheek Louch is often overlooked. This comes in spite of his own legendary track record. Currently, Sheek Louch and Ghostface Killah are working together on their joint album, Wu-Block, a mash-up between the Wu-Tang Clan and D-Block.

Sheek Louch proved himself in 1998, when DMX called upon him to contribute to “Get At Me Dog,” the first single from It’s Dark and Hell Is Hot. Originally, DMX wanted Ja Rule on the song, but when he was unable to make it, Sheek Louch was called. Being on one of the hottest singles in the streets helped build Sheek Louch’s solo buzz.

Due to his low profile, Sheek Louch is often overlooked, despite his strong business mind. In addition to being behind a number of hits, Sheek Louch worked closely with J-Hood during his time with D-Block. Sheek Louch would become the most-consistent member of The L.O.X. a few years ago, releasing albums every year from 2008 through 2010, rebuilding his large fan base. During this period of time, Sheek Louch released what is arguably his biggest hit, “Good Love,” which came early in 2008.

Building a strong buzz through his independent releases, with Koch Records (currently known as eOne Music), Sheek Louch caught the attention of Def Jam. Joining Jadakiss on Def Jam, Sheek Louch would release one album, Donnie G, with the label. As previously mentioned, Sheek Louch is currently working on Wu-Block with Ghostface Killah, returning to eOne for the project. Since the release of his last album, Sheek has followed the example set before him of Jadakiss and Styles P, releasing mixtapes to keep his name relevant.

While some may label Sheek Louch as the third wheel of D-Block, behind Jadakiss and Styles P, he firmly stands on his own as a legend in the rap game. Over the course of his career, Sheek Louch has released five studio albums and has collaborated with such people as DMX, Fabolous, Redman, T.I., Beanie Sigel, Jim Jones, Game, Fat Joe, Bun B, Jeremih, Kevin Cossom, The Notorious B.I.G. and more. Flying under the radar, Sheek Louch has earned the respect and admiration of the biggest names in the game, on all sides of the business.

Watch “Get At Me Dog” by DMX ft. Sheek Louch below:

Watch “Mighty D-Block (2 Guns Up)” by Sheek Louch ft. Jadakiss and J-Hood below:

Watch “One Name” by Sheek Louch ft. Carl Thomas below:

Watch “Party After 2” by Sheek Louch ft. Jeremih below: