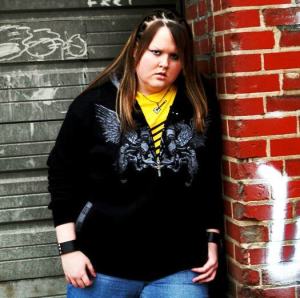 Over the past week, Hip Hop Vibe has been spotlighting the St. Louis hip hop scene and showcasing some of the talent in the city. Many will argue St. Louis hip hop is no longer relevant, but the city is full of major players. After showing Kenny Knox, Ruka Puff, and Tef Poe, arguably the most-unique star of them all, Skiddalz, is being spotlighted.

Not only is Skiddalz arguably St. Louis’ biggest rap star, at the moment, she is also representing the struggling female sector in the rap game. For others, this may cause a bit of pressure, but this is not the case when it comes to Skiddalz. The young femcee has turned heads with her lyrical ability and she has a firm grip on everyone’s attention.

Skiddalz’ “OMG” single has been buzzing for close to a year. Earlier this year, she actually premiered the music video on MTV. In addition to premiering her videos on MTV, Skiddalz has watched her music be featured on the popular MTV series, “Jersey Shore.” Clearly, there is a lot more of St. Louis left for the world to see and Skiddalz is a big reason why.

Watch “OMG” by Skiddalz below: