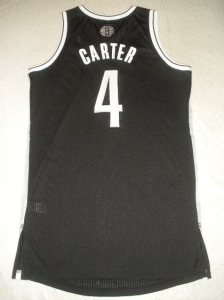 To usher in a new era of NBA basketball, Jay-Z has finally relocated the Nets to Brooklyn. Though plans were made well over five years ago, the construction of the Barclays Center in Brooklyn is what took things so long. With the arena finally completed, Jay-Z held a concert series in the arena, breaking it in, and he donned his own Nets’ jersey.

During their final seasons in New Jersey, the Nets went from being one of the better teams in the league, consistently making the playoffs, to being bottom-feeders. However, the Jay-Z ownership stake paired with the energy in moving to Brooklyn made the team a top destination for free agents. Many of the biggest stars in the NBA expressed interest in playing there.

Aside from Deron Williams, the face of the franchise remains Jay-Z. So much of a face, Jay-Z even had his own jersey, which he wore during his performances. Often calling himself the Michael Jordan of recording, Jay-Z’s jersey got much wear. Now, his “Carter 4” jersey is up for auction on NBA.com and the bidding ends on October 31.