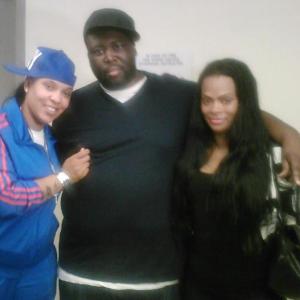 Never count a New Yorker out, as the hard work ethic and the proud tradition of the Empire State always keeps them in the running. Not too long ago, there were numerous people saying New York had fallen off. These people are now eating their words, as several of the biggest new rappers in the game hail from New York City, the heart of the United States. Many of these rappers also have an extensive background in other forms of entertainment, which is the case for Eleven.

Known by most as a jack of all trades, Eleven does have a rapping gig. However, he is making a name for himself as the man who is bringing the female rappers back into the spotlight. A few weeks ago, Hip Hop Vibe posted a clip of the “She Got Next” DVD. The man behind the upcoming DVD and helping these ladies gain success in the industry is Eleven. Not only is Eleven helping newcomers, he is also working with the likes of DJ Lazy K, Babs Bunny (formerly of MTV’s “Making the Band 2), Shawnna, and many others.

Eleven has opened doors for many people in the industry. Along the way, he has been blessed to work with and know the likes of Wiz Khalifa, popular video vixen, Gloria Velez, and more. Now, Eleven is branching out and offering his services to the numerous talented female artists. The rising entertainment figure has several projects in the works. With the female rap game practically dormant outside of Nicki Minaj, Eleven is giving ladies a voice through his “She Got Next” brand.

Hip Hop Vibe recently had the chance to work with Eleven, who is a modern-day pioneer in female hip hop. Nicki Minaj recently racked up her third, in a row, female rap artist of the year-type award at every ceremony. Minaj, herself, even apologized as she took one of those awards at a recent show. In his Hip Hop Vibe interview, Eleven explained how this will soon be a thing of the past, as he is working with some rising females and some faces and names many should remember, these names include Ma Barker and Lady Luck.

How did you get your start? Oh! I don’t know, exactly. It was something that was there. I used to make beats in school, the teachers called it banging on tables (laughs). There was so much music, Dana Dane, Big Daddy Kane, The Fresh Prince (Will Smith). So, I decided I wanted to rap and my cousin taught me how. I ran with it from there.

What made you decide to fully focus on promoting female artists? I used to run a radio station and I had a lot of time to think. One day, it hit me, I just though “where are the ladies at.” There were a lot of award shows, no ladies, there was a lot of talk about female rappers in the past tense. I was at the H20 Film Festival and I met Rah Digga, at the time I was working with male rappers. When I met Rah Digga one of the guys with me just left. At the time, Rah Digga pointed out to me that my team was all girls. From there, I put two and two together and began pushing this movement.

How did you link up with Babs Bunny and Shawnna? Oh man. I met Babs through Unique, the first female mixtape rapper. She was down with DJ Doo Wop. She worked with The Lady of Rage, Babs, and Lady Luck. Unique invited me to Harlem, to the Apollo, and Babs was opening up for Big Daddy Kane. I interviewed her and we began working together. Babs was one of the first supporters of the She Got Next movement. She would link me with Ma Barker and many other ladies I am currently working with. Shout out to Babs, queen of the Reign Movement.

Shawnna, I was working on a TV show a few years ago. I became close with her manager and I kept the relationship open. So, I look out for opportunites in New York for them. Shawnna sends me exclusives and we continue to communicate.

Can you tell us more about the She Got Next DVD? She Got Next, shout out Eve. It was Eve’s idea for me to turn this into a documentary. She Got Next was going to be interviews with Lady Luck, Babs, and more. From there, I was just going to do battles featuring female rappers. A lot of people think this is a documentary based on females. We have seen this type thing featured on BET, detailing the female rappers’ evolution. But, She Got Next really goes in-depth, going into what happened with the female rappers, why they do what they do, and the mindset of these ladies. Of course, asking the question why the female rappers became overlooked in the industry. I wanted to show there were more females in this rap game. There are ladies you never heard of making serious money just off college tours. Yes, there is Eve, Nicki Minaj, and Lil’ Kim, but there are so many more female rappers. The industry has people focused on just one female, but there are so many more.

What should potential viewers expect on this upcoming release? I am in talks with some major television networks who want to turn it into a docu-series. I am not sure if that is the route I want to take, because TV wants everything politically-correct. I do not want it to be about the money. Instead, I want to show off these female rappers and for the people to support these ladies by buying the music, coming to the shows, and downloading their mixtapes. This is why I am here to show the world female rappers never left. Also, the soundtrack is going to be crazy, Lady Luck played a big part in that, as my partner on the soundtrack. The soundtrack is going to be completely different from any female compilation ever before. I say this because people will feel they already know what to expect. Long story short, they don’t quite know what to expect.

Who are some of the female artists you are working with that fans should look out for? Lady Luck, she never left. She is doing stuff right now that is even bigger than music. Kanary Diamonds, we have the same management. Ma Barker’s album is crazy, be on the lookout for it. Shawnna has more projects in the works. I am working with DJ Lazy K, the biggest female DJ in the game. Herdonis Da Amazon, her stuff is amazing. I am working with Gloria Velez, the video vixen/rapper, she is getting a lot of feedback. There is this new girl I am also working with, I had to prioritize and I began working with J-Sass, from Jersey, a diamond in the ruff. She is up-and-coming and she is everywhere.

Can you talk about the ten-year-old lady you are working with? Oh! J-Sparkle. She has been rapping for a minute. I have known her since she was very young. Her father does music videos, so it must have been in her DNA to make music. J-Sparkle is from Brooklyn, East New York. Give her another three to four years and she is going to be going hard at these ladies.

Aside from the obvious, in what ways will she stick out? I think, one of the things I did with her, was show her some other girls making moves. She is already unique, in terms of personality and even the way she dresses. This girl is going to stand out, because she is not trying to hard to stand out. With some of these kids, you can tell their parents have written her stuff. But, she writes her own stuff and raps about the things she knows about.

How do you feel about the recent success of Lady Luck? Oh! It has been a long time coming. Just like the other girls, I am a fan of hers and I have been a fan of hers. Everything that happened for her, she deserves it. But, she is still growing, so the fans have seen nothing yet.

What do you see happening for her in the near future? Oh man! I see acting, definitely acting. Right now, she is my partner on the She Got Next soundtrack. She will be doing some executive producing and just being an executive, period. We are working on some stuff right now that will take hip hop to new heights. The funny thing is that she is not even going to rap.

What has inspired you to dedicate so much effort to the female rap game? I am a big fan of female artists, first off. I saw a lot of wack dudes getting on, while a lot of hot female artists being overlooked. Personally, I feel the girls are being mistreated. Sometimes, I have to get out of character to give them props. But, with these dudes with less talent and potential and they get full support and respect. Also, I have been fans of these ladies way before I met them. They had their own brands way before I met them and they still do. These girls still have their own movements and I am here to enhance them. My goal is to help them realize their dreams and put a scare into the industry.