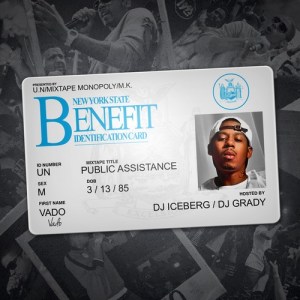 At one point, Vado was one of the biggest artists on the mixtape scene in New York City. It was then when Vado was toted as the next big thing from New York. Eventually, this role would be filled by French Montana. Earlier this year, Vado was a part of Cam’ron’s movement to release one new song every day for a month.

During his initial run, being picked as one of the next big artists out of New York, Vado was signed by Interscope Records. Vado has released several mixtapes, with the exception of his collaborative album with Cam’ron. Now, Vado is preparing his latest mixtape, Public Assistance.

Vado is teaming up with two of the biggest names in the mixtape game for Public Assistance in DJ Grady and DJ Iceberg. Currently, there is not much information on the upcoming project. Recently, Vado released the official cover for the new mixtape. The project is currently set to be released on October 15.