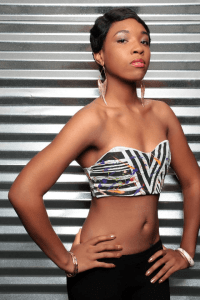 A growing hip hop base is Orlando, Florida. While lacking the star power of Miami, which boasts such big names as Rick Ross and Ace Hood, Orlando has a huge hip hop scene. Many of the Orlando artists are all on the verge of becoming superstars. This statement could not be truer when it comes to Remedy Da Franchise, one of the numerous rising female artists in the game.

When did you move to Orlando? I’ve been in Orlando pretty much my whole life. I was raised here since I was like a baby. We moved here around ’95 or ’96.

What are some common misconceptions about the city of Orlando? That we are all about Disney and theme parks. There is so much more to Orlando than these tourist attractions. Technically, places like Disney might as well be their own city, because that’s pretty much what it is. We also have an extreme amount of talent in various genres here that has yet to be discovered. I think, because we have all the attractions, it gives people who aren’t from here a false perception that the city is pretty much based around that. There is a lot more going on out here than majority would think; its not just a vacation spot by a long shot.

How do you feel about the recent success of the Orlando hip hop scene? I think it’s great, but we have a long way to go. A long way. But, any success coming from anyone from here is a start! We just need to keep building momentum and use it as a stepping stone.

Have you worked with many other artists in the area? Yes I have. I’ve worked with a lot of artists, it’s almost too many to name, actually! There are a lot of new projects coming out with others that will drop soon, so if you stay connected with me online, you’ll see them with no problems. I believe in supporting and working with those who take this as serious as I do.

Can you tell us about some of the other artists you work with? Sure. I’ll just briefly talk about some of the more recent work. Skyy High is like my big sister. We have a few songs out, the most recent being “Goddess” which was on her album, and her devotion to her craft is insane. She’s a very encouraging person and uses her craft to lead. So does Chuck Dee who I have a song with, and 1 Dawg who I also have a song with; 1 Dawg is one of the best poets I have ever heard. Clint Dawg works crazy hard! I admire his drive beyond the fact that he is raw and takes the streets to a new level with his music. We have a song called “The Problem” which is an anthem for most. There are many more to name: Semi Ice, Twan D, Wreck Wregular, Stefon4u, Jazee, Truth, Sipp, and many more. Anybody who I didn’t name is still doing their thing, DON’T GET IT TWISTED! If I listed everyone, who I thought was coming with it, we’d be here forever. My city is deep. I also have a lot of people I work with who aren’t in the city, and once again they take their craft SERIOUSLY! But, if you follow me, you’ll hear them on my music and hear about them all because I support who I work with!

How would you best describe your career so far? My career has been a learning process so far. I have gone through a lot of development with my work, and now that I feel like I know who I am as an artist, I am going through development business wise. It has been a lot of transitioning within my team, but it is absolutely necessary in order to get Da Franchise to the next level. I have gained so much knowledge about myself and this industry in the midst of it all.

Do you perform live often? Yes, but now a days I am doing a lot of performances outside of the city. I’m not here as much, but you will see me pop up every now and then around places even if it’s just to support. However, traveling is replacing a lot of local performances.

Where are some of the hot spots in Orlando? It depends on who you ask! (Laughs). But, as far as artists are concerned, 57 West is a very popular place for locals. Club Liquid, The Haven, places like those have a lot of local talent that come through and put on shows. Far as partying is concerned I love to go to Limelight every now and then, Vain Night Club, places like that. Draft is also popular and a very nice club! Draft is where I shot my music video for “Goin Stupid” in, so they will forever be HOT to me.

Can you talk about your Changing Faces mixtape? Well, my third project was Changing Faces, which was released last year. It symbolized me coming of age and finally stepping into who I am as my own artist. I love this project, because I felt like it did me the most justice so far and I got a lot of props off of it, and I am still getting positive feedback on it a whole year later. My other two mixtapes didn’t really showcase what I was capable of in depth, but they were good starting points for a young emcee trying to find themselves. But I’ve improved since Changing Faces in so many different aspects and the next project is going to show that.

Who are some of your favorite people to work with? Anybody who takes their craft seriously and takes pride in it. I really do not like to waste my time with those who only do this to say they did it. Working with people who are passionate about their work and have drive to do this are my favorite people. I won’t name any specific names because it pretty much boils down to that.