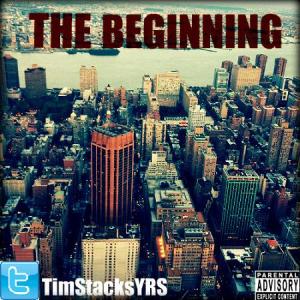 On the Rise alum, Tim Stacks, has been working on The Beginning for close to one year. When Hip Hop Vibe first met Tim Stacks, last fall, he was putting the finishing touches on his NY 2 NC mixtape. Hailing from New York, Tim Stacks would relocate to Charlotte, where he has watched his career blossom.

Over the past few months, Tim Stacks has released several songs off his new project, which he has been working on with DJ YRS Jerzy. Close to completing The Beginning, Tim Stacks is ready to unleash his new fury onto the hip hop world. Promising to deliver some of the best music on the independent landscape, Tim Stacks says it is indeed the beginning.

Still working out a release date for The Beginning, Tim Stacks released the official artwork for his project. Releasing the artwork exclusively to Hip Hop Vibe, Tim Stacks is preparing to deliver what he says will be one of the best releases of the year.