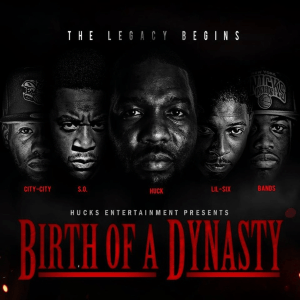 To the masses, the hip hop scene in Fayetteville, North Carolina is only occupied by J. Cole, the face of Jay-Z’s Roc Nation. Before and after J. Cole, however, there is much talent flowing throughout the city. One brand quickly gaining recognition in Fayetteville is Hucks Entertainment.

Led by Huck, who branded the company after himself, the label is on the verge of emerging into a powerhouse in the rap game. On an independent scale, Hucks Entertainment has enjoyed much success. Though he is a native of Baltimore, Huck has established his brand in the Fayetteville area and it is North Carolina home grown.

Hip Hop Vibe recently spoke with Huck and he talked about the establishment and growth of his brand. Huck was very open about how his company came to be and his previous affiliations. Remaining humble and being consistent is generating more attention by the day for the overall Hucks brand.

Where did you get the name ‘Huck’ from? The name Huck derives from the streets of Baltimore. People started calling me that off something that was said off the movie Tombstone where Doc Holiday said, “I’ll be your Huckleberry.”

Can you talk about your time with Big Boy Entertainment?  Big Boy Ent was run by Mr. Anthony Jordan who was a sound engineer at Sony Records working with artists including Earth, Wind, &  Fire, Jon B, Young Gunz and many others. My time working with them was a great learning experience and helped me to develop knowledge of the music industry, sound engineering, and production.

How did Hucks Entertainment come to be? I came up with the idea to start my own label after the passing of my brother. After the impact of his loss hit me very hard I wanted to focus my life in a different direction and decided to take my passion for music to the next level.

Will you eventually end your own career to focus more on the label? Well, I have already given up my solo career and put all my time and efforts into the label and to the studio. We work with some of the best independent artists and being able to share our knowledge and passion with them. It has helped us to become a needed asset in our market.

What type of impact have you had on the Fayetteville hip hop scene? We work hard on perfecting the sound that the artists we work with have as opposed to what they came with before they worked with us. We get a lot of feedback from the artists and radio stations and our name has quickly became the brand to go to if you want professional quality.

How did you begin working with Stranga The Great? Ironically me and Stranga were next door neighbors and didn’t know each other. We met through a mutual friend, Barry Williams, who is a film and music director in our city. He introduced us and we shared similar stories and started comparing music. While in the studio, I started featuring Stranga on projects with some of my artists and the rest is history.

Do you feel he will take Hucks Entertainment in a new, better, direction? He already has done that. He has a major impact in my life and keep me motivated on a daily basis. He has shared his insight and experiences which has helped us to grow as a label and as a family.

Who are the marquee artists on the Hucks roster? We have Lil Six, who is known as Six On A Bean, due to his energetic persona and ability to captivate crowds with his live performances. Also we have City City, who is one of the best performers whom I’ve ever seen hit the stage and can kill it with  the dance moves and the vocals. Next we have S.O., who is more known for his energy and his knack for keeping the crew looking good as a hypeman. We have Speedie Speed, from New Orleans, who is extremely versatile and portrays the struggle of the streets thru his music as good as anyone ever has. We recently just added R&B artist, T-Smuv, from Georgia who brings to the table an  extra hunger and grind plus makes the team more of a threat with the female fans. Last but not least the first lady of Hucks Ent. Sharee Fox. Fox gives us a different type flavor with her diverse style, poetic nature and eclectic sound.

Can you talk about some of the upcoming releases from Hucks Entertainment? We have Huck Everybody Vol 1., which we just finished as a family compilation. The Birth of a Dynasty, which will be our first  official full length album, should released in the first quarter of 2013. We also have projects in the works with all the artists on the roster planned for 2013. In the meanwhile we are working on getting our business plans in order and perfecting our stage shows.

Are you pleased with the progress of the label so far? As a whole, I’m not as pleased as I could be but I’m far from disappointed. I have made more progress then I ever did before and with the addition of Stranga The Great, we already have some better opportunities on the table. Our goal is to start touring some of our target markets and to increase our revenue with our merchandise and royalties.

What do you predict for the future of the Hucks brand? I’m anticipating increased exposure for the brand and of course nothing less than being able to have our brand stand beside some of the bigger labels in the country. Whether that happens with a distribution deal, or by our continued hustle and grind independently, we will definitely leave behind a legacy through our music.