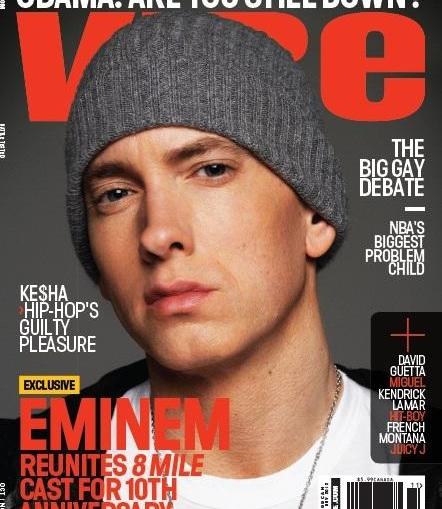 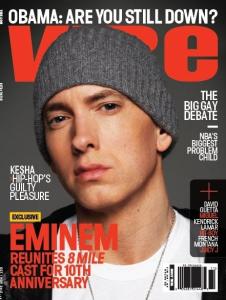 Time has gone by at rapid pace, as the ten year anniversary of Eminem’s 8 Mile film is rapidly approaching. Starring Eminem opposite the late Brittany Murphy, the film showcased the acting chops of the Detroit emcee. For the first time, fans had an inside look on how Eminem came to be, even though his film was not exactly a bio-pic.

8 Mile, itself, was a classic film, but the soundtrack was also unforgettable. The soundtrack included standout tracks, such as Nas’ “U Wanna Be Me,” a diss aimed at Jay-Z. Jay-Z and Freeway also delivered the track, “8 Miles and Runnin,'” for the feature film. However, “Wanksta” by 50 Cent, a perceived diss toward Ja Rule was included, launching the career of the Queens rapper.

VIBE recently selected Eminem as their latest cover artist. During their interview, Eminem discussed the film. Eminem would discuss the battle scenes during the cover story.

Read an excerpt of Eminem’s VIBE interview, via RapRadar.com below:

“How were the battle scenes written? Eminem: I think Curtis had a lot of the guys write their own things, and then I would see what they were going to say. I might sit there with some of the guys and be like, “What if you changed this?” The hardest thing for me was trying to figure out what that last [rhyme] was going to be. As I was going back and forth with the other guys about what they were going to say—“Okay, if you’re going to say that, then I’ll write this”—the last one was [challenging] because I didn’t have anything to respond off of. So I had to write it myself, off what somebody could say to me. Mackie: I’ve gotta give it to Curtis, because he challenged us. It wasn’t just, “Okay, bring us what you’ve got.” He kept you on edge, like, is this enough? Am I giving enough? Eminem: That’s the other thing, too, with the battle scenes. I remember him saying, “This shit has gotta be flawless. [Then] Curtis would say, “Is this good enough?” I went back and rewrote a couple of lines. Curtis definitely, definitely pushed us.”