Throughout his career, 50 Cent has often butted heads with Jay-Z. Before his feud with Ja Rule rose to the epic proportions, 50 Cent targeted Jay-Z in his rhymes. Only once Jay-Z responded to 50 Cent, on his “It’s Hot (Some Like Hot).” Jay-Z has engaged in several subliminal feuds, including Fat Joe.

In 2008, Jay-Z and Fat Joe would perform together, ending their feud. However, 50 Cent used their past against them, dissing both. Over the weekend, 50 Cent put his feud with Fat Joe, which started over Ja Rule, to rest when they performed together. Performing for the tribute to Chris Lighty at the 2012 BET Hip Hop Awards, 50 Cent linked with Terror Squad.

While 50 Cent made peace with Fat Joe’s crew, he took shots at Maybach Music’s Gunplay on Twitter. 50 Cent would also take aim at Jay-Z, tweeting the above photo of Raul, the man who hit Jay-Z in the head with the bottle. On Twitter, 50 Cent mentioned this, referring to Jay-Z as “JAY.” 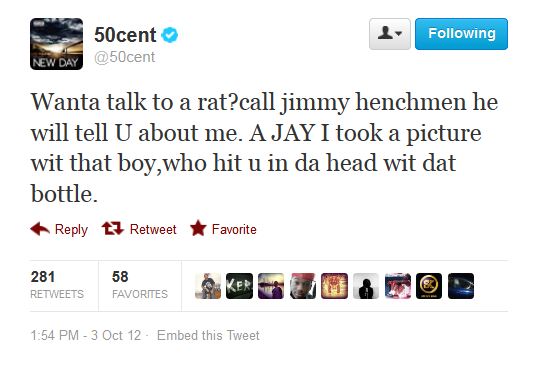