In 2009, Rick Ross caught the attention of the hip hop world when he openly challenged 50 Cent and held his own against the controversial rapper. Ironically, 50 Cent’s career, which was already declining, continued to freefall. Meanwhile, Rick Ross was bolstered by the high-profile feud, becoming the most-popular rapper in the game.

Rick Ross’ entire Maybach Music team, at the time, took shots at 50 Cent. Gunplay stepped up bigger than most. During the 2012 BET Hip Hop Awards, a lot of hip hop feuds spilled over. Young Jeezy and Rick Ross fought, as did Gunplay and Mike Knox. Admitting he never had beef with 50 Cent, Gunplay would also say he has no idea where his chain is.

Later, Mike Knox revealed he had it and apparently 50 Cent does now. While he ended his feud with Fat Joe, 50 Cent still holds animosity toward MMG. With Young Jeezy’s birthday coming up, 50 Cent told him, via Twitter, what he would give him. While he did not mention him by name, 50 Cent offered Gunplay’s chain as a gift. 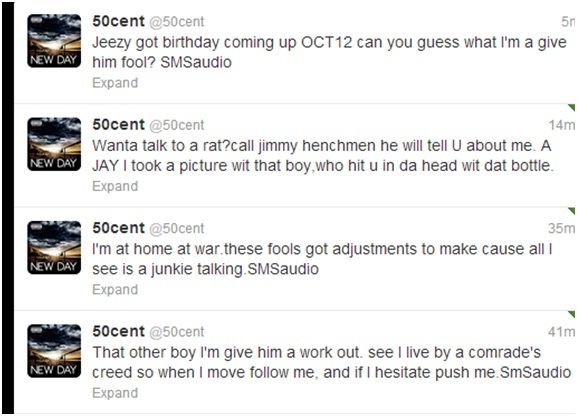