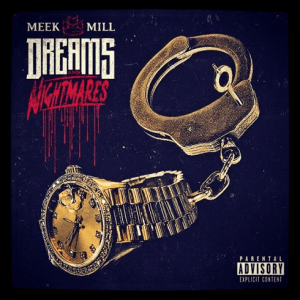 Over the past few years, Meek Mill has become the biggest artist in the Philadelphia hip hop scene. Meek Mill released several mixtapes, eventually leading to him catching the attention of T.I. For a brief period of time, Meek Mill was signed to T.I.’s label, Grand Hustle Records.

Because of the legal trouble both rappers endured, Meek Mill would eventually decide to leave Grand Hustle Records. Back on the mixtape scene, Meek Mill continued to drop more bombs. Eventually, Meek Mill caught the attention of Rick Ross, via Twitter, and he signed him to Maybach Music.

Since February of 2011, Meek Mill has been a member of Maybach Music, stealing the scene from fellow MMG artist, Wale. During Maybach Music’s press conference, earlier this year, Meek Mill’s Dreams & Nightmares album was officially announced. With the album set to be released at the end of the month, Meek Mill has released the album’s official artwork.