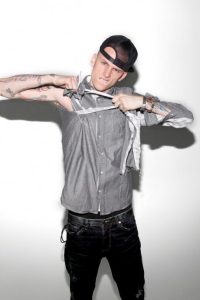 Last summer, Machine Gun Kelly went from being a popular mixtape rapper from Cleveland to the newest artist on Bad Boy Records. Diddy, after noticing Machine Gun Kelly’s rising talent, would sign the young rapper to his label. From the beginning, it was clear Machine Gun Kelly was unlike any other artist in the game, as he was much wilder than everyone else.

In the fall of 2011, Machine Gun Kelly would show off his wild side with “Wild Boy,” which featured the wild child of the South, Waka Flocka Flame. “Wild Boy” would go on to become one of the biggest songs in the spring of 2012. Machine Gun Kelly was just getting started, as he made preparations for his Lace Up album.

Nine days stand between Lace Up‘s release date. Much like many of hip hop’s other biggest names, Machine Gun Kelly is in Atlanta for the 2012 BET Hip Hop Awards. With fights going down between both Young Jeezy and Rick Ross, which MGK witnessed, and Gunplay and G-Unit, everyone played the role of bystander. However, Machine Gun Kelly would get into his own drama when he refused to get off the display tables at the Microsoft Store in Atlanta at the Lenox Mall.