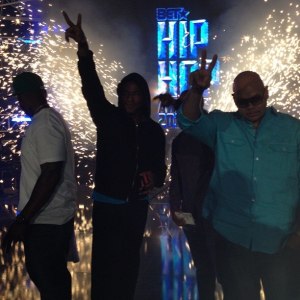 “That fat nigga thought “Lean Back” was “In Da Club,” my shit sold eleven mil, his shit was a dud,” 50 Cent uttered on his 2005 track, “Piggy Bank.” Leaked in January 2005, this song established the feud between 50 Cent and Fat Joe. Previously, Fat Joe contributed a verse, alongside Jadakiss, on Ja Rule’s “New York.”

With 50 Cent’s aggression toward Ja Rule still high, he targeted everyone who he felt was supporting Ja Rule. 50 Cent would exchange Jadakiss disses for three years until they made peace. Fat Joe, however, vowed to never make peace with 50 Cent. While the two feuded, Chris Lighty managed both and never was involved in the feud.

Last month, Chris Lighty died and BET decided to tribute him at the 2012 BET Hip Hop Awards. The plan is for every member of Lighty’s Violator Management to perform on the same stage. Given the hostile relationship between 50 Cent and Fat Joe, many wondered if this collaboration would ever come to be.

The above photo says it all, as the two just shared the stage together. Funkmaster Flex got on Twitter and announced 50 Cent and Fat Joe did more than share the stage, they also shook hands.