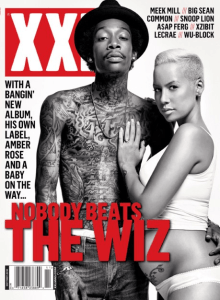 At the right time, things are looking up for Wiz Khalifa, who has enjoyed a tremendous run of success, anyway. In December of 2010, the Taylor Gang leader was on top of the world, as he matched his hit single with a model girlfriend. Dating Amber Rose, the ex-girlfriend of hip hop superstar, Kanye West, many expected tention.

Numerous rumors insisted Wiz Khalifa and Kanye West disliked each other. Wiz Khalifa made it clear he did not know Kanye West, who later said he respected Wiz. On “Cold,” Kanye West made his return to the rap game clear and has a potential ally in Wiz Khalifa. For Wiz, the focus has been on his business and now his growing family.

With fall now upon us, Wiz Khalifa has one more thing in store for the public and it is his sophomore album, O.N.I.F.C. XXL has capitalized off the success of Wiz Khalifa, featuring him as the cover star, alongside a pregnant Amber Rose, for the “Nobody Beats the Wiz” feature. During the interview, Wiz Khalifa talks about how he has to keep recording, even with his child on the way, juggling both roles with Amber at home. A father for the first time, Wiz Khalifa admitted he was very excited about the birth of the child.