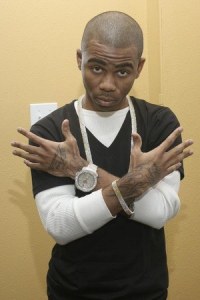 There is a lot of rising talent in New Orleans, as the Cash Money Records movement has dominated for two consecutive decades. However, there are many other artists from New Orleans who are making moves in the post-Katrina movement. Among those artists include Chopper City, gaining fame from “Making The Band 2,” and several former Cash Money artists.

Young Curl was signed to Cash Money Records, seven years ago. Since parting ways with what would become YMCMB, Young Curl has enjoyed rising success. Now, Young Curl is the head of his own movement, Hood Rep. From New Orleans up to Atlanta, the Hood Rep movement is quickly becoming a household name.

Hip Hop Vibe recently caught up with Young Curl, who has become one of the biggest mixtape rappers in the game. Young Curl would speak on his time with Cash Money Records. However, the conversation would center around the Hood Rep movement and his solo career.

While you are on your own now, you were signed to Cash Money Records at one time? Yeah. When I was seventeen, I signed a deal worth $1.4 million deal with them.

How did you wind up with Cash Money Records? Prior to signing with them, I had a long relationship with them. Every summer, I had the chance to go on the road with them. Since I was thirteen, I knew them, and I decided to sign with them.

How would you describe your time with the label? First and foremost, Birdman put me in a position every artist dreams of. They put me on the Cash Money album. Just from that one feature, I was considered a mixture of all the Hot Boyz. Everything was really good, I received a lot of press, I really enjoyed it.

When did you decide to leave the Cash Money label? My stint over there was extremely brief. I signed in 2004 and left in 2005, but as I said, I was already over there from the age of thirteen. I went on the road with them before, but the deal did not become official until 2004. But, when I signed, things went good for the most part. However, I needed to make my own moves, so it was best for me to leave. Looking back on it, I realized I was impatient, especially with them being focused on other projects. I was a team player, but I was really focused on my own solo movement, too. Other than that, it was a great experience.

What did you learn from Birdman during your time on his label? I learned to be consistent. Work ethic will make it or break it. The focus on younger artists is money, cars, and women, but it is irrelevant. If you do not work, that stuff won’t come. Go hard or go home dude. That is what I took from it, so I continue to stay consistent. You have to work harder than everyone, no days off when you are in this game. When you get to the top, you still have to sacrifice, because you have to stay there.

Can you explain the relationship you and Lil Reggie share? Lil Reggie is my brother, me and him are the same person, for the most part. We have more things in common than we don’t. Any relationship you have, whether it is brotherly or romantic, there should be an understanding. The first conversation we ever had, I knew we would be best friends. Being a man of principles and respect, Lil Reggie was too and that is why we work so well together.

How many projects have you released under this brand? I have released two mixtapes, Hood Representative and Hood Representative 2. It was those projects that caught Cash Money’s attention. A friend of mine let them hear my music and they were interested. They already knew me, but the story blew them away. I am a positive person, I do not glorify the rough stuff, but my life was real.

The New Orleans hip hop legends are Master P, Birdman, and Slim and my story was deep. The people who raised me are doing triple life right now. Those guys realized the stuff I rap about in my music, I saw. Because of the life I lived, I saw the world and I learned business. My family had a history in the city, but I took their life and put it into my music, the rap pioneers knew this history and began paying attention.

Do you have anything planned to release before the end of this year? To be completely honest, I am still putting together the blueprint. I put songs together in three to five minutes. But, I am getting my music and my information about the business together to go forward. When I first started, my focus was music and only music. Knowing more, I have realized there is a lot more that goes behind it in business.

What are some of your long-term goals? First, my goal is to free my mother. I will do what I can to free her. She has been in prison since I was nine years old. Before I was rapping, my music was poetry, poems about missing her. I was venting about the things I was going through. Daily and consistently, I put those out, soon it began rhyming, and then I put a beat behind it. Then, the labels began paying attention.

I am the stepson of the biggest drug lord in New Orleans and I’ve seen everything, but I never had anything to do with it, I focused on telling this story in the music I make. The people have to respect the history and how I have managed to be a positive, overall person. I did not let the circumstances take me over, I will continue to be positive and put music out.