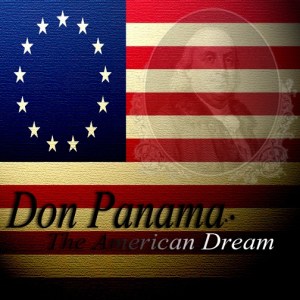 Often told by American History is the dream many immigrants had of leaving the “old country” for new hope in the United States. The stories are told of the great men which have led this nation, including such presidents as George Washington. Other pioneers credited include Benjamin Franklin, a major hip hop topic.

However, given the poor economy in recent years, the American Dream would seem like a nightmare to many. Independent artist, Don Panama, still sees the positives in the American Dream, as it is the title of his latest album. With hip hop music as his hustle, Don Panama showed exactly what he is about.

Becoming more and more common in hip hop is the versatility of rappers, as they can party and provoke intelligent thought. However, with all new rappers trying to be “versatile,” this sector of hip hop has become over-saturated. Don Panama jumps into this lane, not to live up to any sort of hype, simply because it comes natural.

Those who truly listened to his album, The American Dream, can see how easily he makes this transition. Simply explaining his own dream of America, over the course of eleven tracks, Don Panama makes it easy to see his vision. While expressing his raw feelings, Don Panama invites everyone who listened to him into his party. It is this blend that separates Don Panama from the other party Latino rappers in the game.

Don Panama, unlike many others, has successfully created his own lane with The American Dream. Something many artists often boast about being able to do, while being lumped into the same category, is what Don Panama has unintentionally done. Regardless of how people feel about this genre of hip hop, Don Panama’s The American Dream album is a classic.