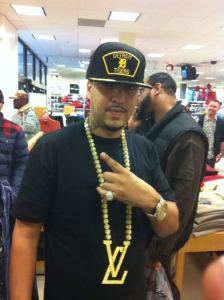 During this time, one year ago, French Montana was holding meetings with Rick Ross and was rumored to be headed to Maybach Music. French Montana, out of nowhere, claimed his position as the “next big thing” out of New York City. Consistently releasing new music, French Montana became the focus of a bidding war between several labels.

French Montana ultimately chose Bad Boy Records, which came under scrutiny by many. Diddy has had a lackluster track record with his artists since the death of The Notorious B.I.G. Such artists as Mase, Shyne, Loon, and Yung Joc all build buzz and fizzled under Diddy’s watch. Each of those artists would eventually leave the label in some form of dispute.

However, French Montana said he does not base his relationships off experiences others had. It would be with that statement that French Montana embraced his Bad Boy lifestyle. In a twist of fate, French Montana would begin working with Mase again. Recently, French Montana revealed the pastor would be featured on his upcoming album, Excuse My French.