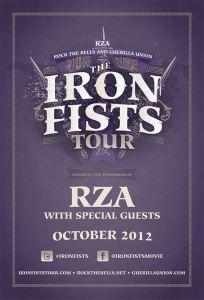 As a member of the Wu-Tang Clan, RZA is automatically one of the biggest legends in the rap game, but this has not stopped him from making his own moves. Just as prolific as his rap career is RZA’s production credits. RZA has produced for some of the biggest rappers in the game, among them the “hip hop president,” Jay-Z.

Many rappers who have gained commercial success have gone on to do movies. With the changes in technology, many rappers finance their own films. Kanye West has made a name for himself doing films over the course of his career. RZA recently jumped into film, too, as he produced The Man With The Iron Fists with Quentin Tarantino.

The Man With The Iron Fists is set to premiere, nationwide, on November 2. With the film set to premiere in a little over a month, RZA is ramping up the promotion. Launching next month will beThe Iron Fists tour. RZA will be traveling around the United States, starting on October 2, and will be visiting such cities as Las Vegas, New York City, and Los Angeles.