Definitely one of hip hop’s most-entertaining figures, Meek Mill has tried his best to remain out of the controversy which surrounds most rappers. A member of Maybach Music, there has only been one notable feud from the crew, Rick Ross battling 50 Cent. That feud was three years ago and before Meek Mill was even a member of the crew.

However, Meek Mill has endured many hardships in 2012. The momentum Meek Mill picked up in 2011 carried over into 2012. Before the release of his debut album, Dreams & Nightmares, Meek Mill released Dreamchasers 2. Featured on the mixtape is “Amen,” which would become the lead single off his album.

Meek Mill would be targeted by Jomo Johnson, a Philadelphia pastor, over the content of his overall music. During this period of time, Meek Mill also got into a Twitter exchange with Chris Brown and eventually into his feud with Drake. With Roscoe Dash ranting on Twitter about his “ghostwriting,” Meek Mill has also tweeted his opinion, calling the Atlanta hip hopper out. 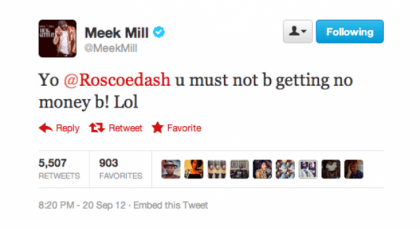