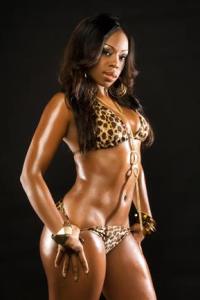 Longtime VH1 viewers should be familiar with Shay Johnson, who burst onto the scene late in the summer of 2006 as “Buckeey” on “Flavor of Love 2.” Teaming up with Larissa “Bootz” Aurora, Shay Johnson would clash with the likes of Tiffany “New York” Pollard and others before ultimately coming up short of winning Flavor Flav’s love. However, Shay Johnson was just beginning to establish herself as a brand.

Shay Johnson would also appear on the first season of “Charm School.” After leaving VH1, Shay began spending her time in Miami, Atlanta, and Los Angeles, pursuing her career as a model. In 2007, Shay reunited with Larissa, co-starring in Fabolous’ music video for “Baby Don’t Go.” During her time away from the televison screen, Shay Johnson kept herself relevant through the internet.

How would you summarize your time on “Love & Hip Hop Atlanta?” It is a great opportunity to be back on TV, to sum it all up.

Are any of those emotional moments on the show staged or scripted? I can tell you that some of my emotions were not scripted. Of course, I cannot speak for everyone else.

Were you surprised by the way some of the stuff was broadcast when you saw it on TV for the first time? Yes. I was very surprised because there were a lot of things I did not know about that I found out about while watching the show like everyone else. It turns out I was lied to.

Has filming for the second season begun? Oh, I don’t know. I can’t answer that question.

Did VH1 have you in mind for “Love & Hip Hop Atlanta,” due to your background in “Flavor of Love 2?” They had me on the show because of my connection to Lil’ Scrappy, nothing to do with “Flavor of Love.”

Being back on television, how many more gigs have you landed? I book frequently, so as far as that goes has been a blessing. Check out my Twitter and ShayJohnson.com.

With a background in modeling and reality television, will you be doing more acting in the future? Acting, to me, sort of comes along with what I do. When the right position comes along, I will do it. There is a lot more to Shay than just reality TV.

What projects do you have going on, outside of your television roles? At this moment, I am working on a radio position. I have always wanted to be a VJ, so we will see where that takes me.

Do you still love Lil’ Scrappy? Yes I do and I always will.