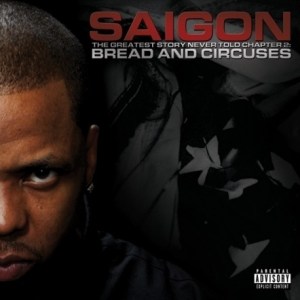 Removed from the numerous album delays, Saigon finally released his highly-anticipated, long-awaited, debut album, The Greatest Story Never Told. Though delayed for six years, the project debuted at a time when New York City was in the midst of a comeback. Saigon was among many New York rappers debuting.

New York City, once again, finds itself full of popular artists, with French Montana and A$AP Rocky in the mainstream. On the mixtape level, Coke Boy Brock, Troy Ave., and others dominate. But, when it comes to albums, Saigon is the only one with an official project out.

On November 6, Saigon will make it two albums, when he releases The Greatest Story Never Told 2: Bread and Circuses. The first single from the album, “Not Like Them,” was released weeks ago. With the first single out, Saigon is preparing his album, which features Chamillionaire, Styles P, and more.