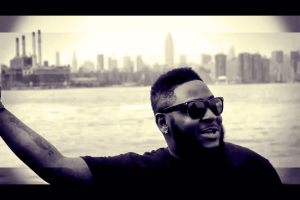 Over the past year, Jus Smith has watched how fantasy can become reality, as his career has taken off, leading him to new heights. Jus Smith is making a name for himself as one of the biggest mixtape rappers in the game. Earlier this year, the Harlem rapper released his debut mixtape, S.M.I.T.H., which has been an overall success.

Jus Smith has several music videos and songs all over the internet. What has been impressive about the Harlemite is his popularity. Still a relatively new player on the mixtape circuit, Jus Smith’s content on the internet has a high volume of traffic. One of the more popular rappers in the game, Jus Smith intends to use it to his advantage, as more new music is on the way.

Hip Hop Vibe spoke to Jus Smith this evening. During our conversation, Jus Smith discussed his mixtape, S.M.I.T.H. Explaining how the project came together, Jus Smith also talked about his background in Harlem. With his “Mellow” video released only a few weeks ago, Jus Smith talked to us about what else he has going on.

How long had you been working on S.M.I.T.H.? That project took a couple of months. We released the first song in May 2011, but we decided to stretch things out until the February 18 release.

Can you explain how the project came together? Well, first off, a lot of people don’t know. I have known Var most of my life and we have always worked on music. But, when I went away for school, I took a break. When I came out of school, we reunited. So, I created my S.M.I.T.H. mixtape, which is an acronym for “Stylin Major In the Hood” and my last name.

For those who do not know, can you tell us who was featured on the project? I only had one feature, which was Danielle Watkins. The rest was straight production with me and Var EZ, who is collaborating with me. I show my lyrics, while he shows off his production work. Now, he is also showing his video skills. But, on my next project, I will have more features.

Have you been impressed by the results of the mixtape? Yeah. Definitely. I feel like for us to have just started one year ago, we have come a long way. We have been featured on several major websites. This is my first collected piece of work, doing music. I was impressed and shocked. The reception remained the same from the first and last song. Now, I am looking to improve upon that and make it bigger.

Are you excited about the new energy in Harlem hip hop? Yeah. Of course. I am excited for it. As corny as it sounds, it seems like every region in hip hop has its time and now its our time. I have no problem with the people coming out, it gives me a spotlight, as no one is making the kind of music me and Var EZ are. We are creating our own niche.

What was it like for you growing up in Harlem? It was definitely a roller coaster ride. Financially, I was fine, as my mother and grandmother took care of us and raised us right. But, I have still seen dead bodies, been exposed to drugs, and saw best friends died. Many people find Harlem special in its own way. There is a lot of history there, a lot of good times and bad times. I am proud to be from Harlem, I always rep the city, which is why I am Jus Smith.

Who are some of your favorite Harlem rappers of all-time? Definitely Cam’ron and Big L. To be honest with you, I don’t think I could explain the impact Cam’ron, Big L, and Mase had. One of the first songs I made, produced by Var EZ, had a Big L sample. He still impacts music today. Cam’ron provides the gutter side of Harlem. Mase provides the glitter party side, while Big L is the lyricist. I like to call myself a mixture of all three.

You recently released the “Mellow” video, what else can fans expect from you? “Mellow” was really the icing on the cake, as far as the S.M.I.T.H. project goes. Now, the focus is on the next mixtape, Greatness, to which we are already seven songs deep.

How do you intend to close 2012? (Laughs). This fall the mixtape will be out, so that is how the year will close. Then, in 2013, there will be more greatness. Everything is going to the next level. The hard work me and Var EZ put into everything. We want greatness and we are willing to work hard for it. Now, we have the movement, PYD (Protect Your Dreams). The brand is now being expanded. Hard work, lyrics, the production of music and videos, we are taking it to the next level.