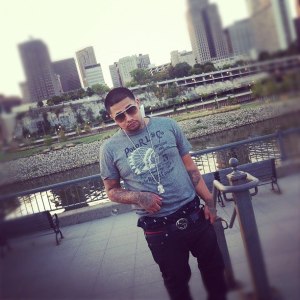 This week, one of the most-discussed new names has been Boss Brick. Hailing from St. Paul, Minnesota, he recently featured Chief Keef on his single, “We Eatin.'” In only a span of three days, Boss Brick is one of hip hop’s newest stars. Along with his own music, Boss Brick has his own record label, Rapper Master Grind Records.

Boss Brick follows the trend of rappers who are also the head of their own labels. There has been a lot of mention about the resurgence in Chicago hip hop. However, this turnaround is more than just Chicago, it includes the entire Midwest. Minnesota has produced such minor names as Rocky Diamonds and now Boss Brick is enjoying his rise to stardom.

Hip Hop Vibe recently spoke to Boss Brick and he disucssed “We Eatin,'” his popular single with Chief Keef. During our conversation, Boss Brick also went on to talk about the development of hip hop in Minnesota. The rising status of Boss Brick is proof hip hop is going global.

How long have you and Chief Keef been working together? I met Keef a while back through my guy Brandon Zeahzr. He is the one who had contact with Keef and he hooks me up with my music. When he told me about Chief Keef, we connected and I had the track put together for him. Chief Keef told me to spit the track, he liked it, and that was that.

Can you explain how you two met? We ended up meeting in the studio and we put the track together, “We Eatin.'”

In only a couple of days, “We Eatin'” has become a viral success, are you surprised by this? Yeah man. I really am, the success has blown me away. Things are working out better than I expected, so it’s a good thing. Now, I’m pushing to get to the next level. The views we are getting is crazy.

What has been the most-exciting part of this journey? The most exciting part has been working with new people and fulfilling my dreams, getting to this real money. I come from nothing and now I want to see the top.

Exactly how long have you been seriously making music? Man, I’ve been doing music since I was fifteen years old, working on projects. I got serious when I was about nineteen or twenty and now I’m twenty-four.

Can you tell us more about the hip hop culture in St. Paul, Minnesota? Yeah man. St. Paul, Twin Cities, we have the same vibe, I rep both sides. Artists out here are more on the lyrical side. I look at it from the standpoint of being in Minnesota, the Midwest, we are lyrical out here. Eminem, Tech N9ne, and Twista are lyrical. I try to be lyrical and simple, so people can understand where I am coming from. St. Paul rappers are more lyrical, how I see it.

Who are some other artists in the area to look out for? My boy Meech!