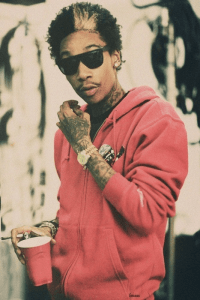 Before Wiz Khalifa, and later Mac Miller, the mainstream hip hop scene in Pittsburgh was non-existent, but their efforts have shed light on the city. Wiz Khalifa first impacted the mixtape scene in 2006, releasing both street albums and mixtapes. Four years into his mixtape game, Wiz Khalifa rose to become one of the biggest rappers in the game.

Wiz Khalifa soon caught the attention of Rick Ross, who offered to sign him to Maybach Music. At the time, the label consisted of Rick Ross’ Triple Cs, including Young Breed, Gunplay, and Torch. Eventually, Wiz Khalifa turned down Rick Ross, while still supporting him. Rick Ross used this to motivate his own run, but it was clear Wiz Khalifa was a mogul in his own right.

Complex recently reached out to Wiz Khalifa, who covers their September/November issue. Wiz Khalifa recently completed a photo shoot for Complex. With the photo shoot being filmed, footage of Wiz Khalifa has been leaked to the internet.