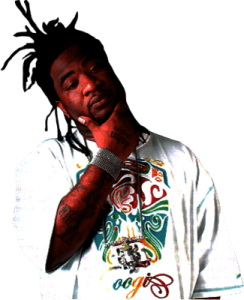 With Papa Duck rapidly rising the ranks, his buzz has expanded well out of the Orlando scene. Among the other stars from Orlando are Bezz Believe and Cash Money Records’ signee, Caskey. Each rapper has their own strong following going for them. Papa Duck is enjoying a strong buzz, especially with his new mixtape being released only three days ago.

“Real Nigga Shit” is one of the standouts from Papa Duck’s new mixtape. During Hip Hop Vibe’s exclusive interview with Papa Duck, he would discuss his Real Recognize Real mixtape and the singles off the project. Papa Duck would also speak on working with DJ Smallz on the project, along with the growing hip hop scene in Orlando.

Can you tell us how Real Recognize Real came together? Real Recognize Real is something I wanted to put together from an industry, artist, and personal standpoint. The industry is tired now, the artists are not real artists, they are not treating hip hop music right. I wanted to come out something that was real for everony. This mixtape is the Triple R 1 and more editions will be coming. I was just tired of all the fakeness.

How did you go about selecting the people who were featured on the project? Well, there are not many people featured. The ones I did choose, however, served a specific purpose. I felt they were best for the selected songs. I did this album quick, so if I sent a record out to someone and it takes them too long, I will fill the verse in. I was eager to get this project done, but the people who were featured fit each song well.

So far, is the reception of the mixtape what you were looking for? Oh yeah. We did right at 10,000 views and downloads in the first 24 hours and it is still climbing days later. For that whole day, we had the highest number of releases and plays. This is big for this to happen on such a critical day, September 11. The closest people to me were behind by double digits. A lot of people showed love to me and my project on Facebook and Twitter. I knew it would be like this, so it is what it is.

Would you call this your breakout release? Virally, yeah. I have never really focused on the internet before. Before this, it was strictly in the street. The internet was something I never did, but we released it virally, we dropped a video each week. Virally, this is my breakout mixtape. All of my projects did numbers, but this one exploded on the internet.

Are you pleased with the viral success of your “Real Nigga Shit” single? Yeah, whether it did the numbers I wanted it to or not, this was something real and the people embraced it. This was a big achievement. All of my music has me behind it, so it did exactly what I wanted it to.

Why did you choose DJ Smallz to host the mixtape? I did a lot of mixtapes with a lot of DJs, both in Florida and overseas. But, I had never done a Southern Smoke, so it was about that time for us to link up. Plus, I have been cool with DJ Smallz for a while now, so we just decided to do it.

What is it like to work with him? It was a good experience, it was everything I imagined. We spoke over the phone and the internet about what we wanted to happen. DJ Smallz was fresh in from Dubai and I love the results of the project. Doing Southern Smoke was big, another notch under my belt.

How do you feel about the growth of the Orlando hip hop scene this year? As far as Orlando goes, I think it is progressing. This is definitely one of the best years I have seen, so far, with artists getting signed and their buzz picking up. I knew this would happen in due time, so hopefully more artists will catch on to what is going on in Orlando.

Who are some of your favorite rappers in the city? In the city? Personally, I really don’t listen to underground rap. Not because I don’t like it, but because I either don’t have the time to, or I’m so busy doing what I’m doing with my own music. But, if I had to, I’d say I fuck with Armstrong, Caskey, those are two people I know are making moves and doing their thing.

With Caskey signing with Cash Money Records, should fans expect to hear of you signing with a major as well? I would say that, people have said Papa Duck, but if you know the history, my fan base is in several states, including Nebraska and South Dakota. We already signed. I have known people who have gotten signed and have not accomplished half of what we have accomplished. You can either be signed as a tax write-off, or signed as an artist. But, his signing sheds light on the Orlando artists. However, I don’t worry about being signed, if it happens, it happens. I have been on the phone and talked to people, I have been hyped up on things that did not happen. Now, the focus is on making good music and I’ll let the rest happen if it is meant to be.

Can you give us a preview of what you will be working on in the near future? I just got off the phone with one of my partners and we are putting a film together. That is one of the biggest things, outside of music, I am working on. Also, in November, I will be releasing Triple R, Vol. 2. Whatever makes sense, I want to do it. Music, movies, and clothing, you never know, stay tuned into Papa Duck, so you can see it.